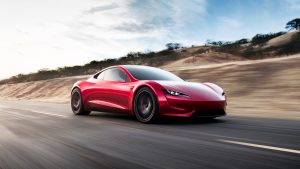 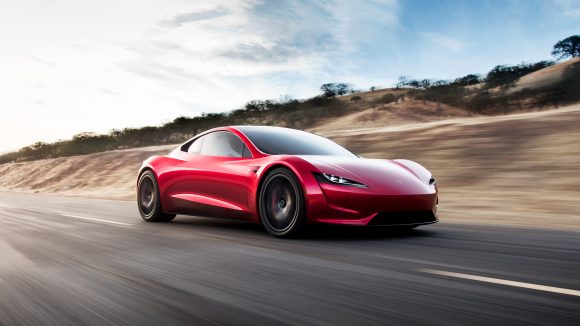 TESLA has caught the motoring world off guard by revealing an all-new version of its all-electric Roadster sports car, claiming blistering performance and a highly impressive range.

The futuristically styled four-seater sports car was revealed at the launch of the electric car manufacturer’s new lorry, and is said to be capable of hitting 60mph in 1.9 seconds with a top speed of more than 250mph.

Performance comes from a 200kWh battery pack, which Tesla claims will give the Roadster a range of 620 miles. Currently, the top-spec Model S has a 100kWh battery pack with a range of nearly 340 miles. It will have three electric motors – one at the front and two at the rear – to give it all-wheel drive.

The California-based company will help raise $250 million (circa £188 million) capital to build the car through 1,000 ‘Founder Edition’ vehicles, which are likely to be fully specced-up models.

At the launch of the Tesla Semi lorry, the Roadster unexpectedly rolled off the back of the truck, with Tesla CEO Elon Musk saying: ‘People have asked us for a long time, ‘when are you going to make a new Roadster?’ We are making it now.

‘The Tesla Roadster will be the fastest production car ever made.’

On the subject of the impressive statistics, Musk said: ‘These numbers sound nutty, but they’re real.’

Musk says the Roadster will go on sale in 2020. However, his company will first have to overcome the “production hell” it has faced in ramping up production of the Model 3, its first mass market car, as well as hitting a 2019 target for its new truck.

The original Roadster was Tesla’s first production vehicle and was based on a Lotus Elise. However, it is likely that the new car will sit on a shortened version of the company’s bespoke platform used in the Model S saloon and Model X SUV.