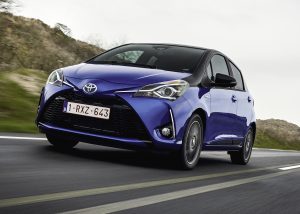 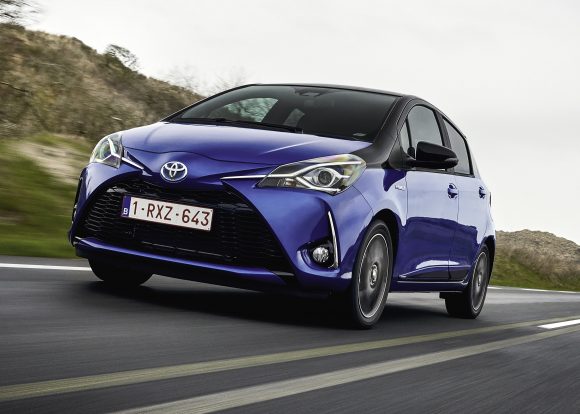 The third-generation Yaris has been around for some time now – long enough in fact to have been subjected to no fewer than two facelifts since it was first introduced in 2011. With this latest refresh, Toyota has dropped its 1.33-litre engine in favour of a new 1.5-litre power plant that is both more powerful and more efficient than its predecessor.

It wouldn’t be unreasonable to assume that the basic 1.0-litre engine, also tested, is one of the slowest on sale. With just 68bhp and 95Nm on tap, the

sprint from 0-60mph takes 15.1 seconds – which feels like an eternity when you’re trying to get up to motorway speeds. If you have the patience, the engine will keep going to a top speed of 96mph – although you will have aged significantly by the time you get there. The larger 1.5-litre engine is a much more useable engine. This develops a far more sensible 110bhp, while torque stands at 136Nm for a 0-60mph time of 10.8 seconds and a 109mph top speed.

We got behind the wheel of the mid-range Icon Tech model, which costs from £15,045. Standard equipment is generous, with features such as satellite navigation, rear parking camera and a seven-inch touchscreen multimedia system all included. One of the key selling points, however, is the large emphasis that Toyota has placed on safety across the entire Yaris range. All cars come with Toyota Safety Sense as standard. This includes a pre-collision system, autonomous emergency braking, lane departure alert and automatic high-beam. Road sign assist is also included on cars in Icon spec and above.

Our experience of the Yaris was mostly limited to low-speed, urban driving, which it handled amicably. The controls were light and easy to operate, meaning the little Toyota was incredibly easy to place exactly where you wanted it. Motorways didn’t really cause it to flinch, either, with the Yaris remaining planted and confident throughout. Where it did fall down was in the engine refinement department, with the 1.0-litre engine in particular making itself heard at cruising speed. There was a lot of wind noise whipped up by the Yaris’s door mirrors, too.

Auto Express said: ‘The Yaris isn’t as fun to drive as a Fiesta, it’s not as refined as a VW Polo, it’s not as spacious as a Suzuki Baleno and it’s not as quirky as a Fiat 500.’ Autocar said: ‘If you’re happy to accept that the Yaris’s ride, handling, quality, infotainment and space are behind its rivals’, it presents itself as a competent, safe and well-equipped buy.’

The Yaris is totally inoffensive – so much so that it comes across as a touch forgettable. There isn’t really much about it that jumps out and grabs your attention, and in such a competitive class as the B-segment it really needs to offer that bit extra. Hopefully the Yaris GRMN hot hatchback that is set to arrive in 2018 will help achieve this.