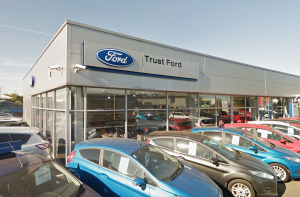 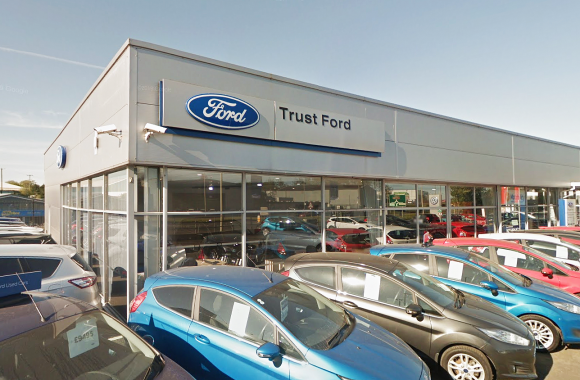 TrustFord has issued an apology after their decision to fell 11 mature trees outside their Wimbledon dealership sparked local fury.

Protestors have been out in force this week, holding up signs and chanting outside the garage, which is a stone’s throw from AFC Wimbledon’s football stadium on Plough Lane.

Residents are furious at Ford’s decision to fell the 30-year-old ash and acer trees on health and safety grounds.

They say that TrustFord did not seek permission from the local authority and were in breach of regulations.

The firm has apologised for the ‘mistake’ and has promised to plant more shrubs and trees in their place.

They have also donated £5,000 to a local primary school to help pay for a new outdoor classroom.

The firm says it has made funds available to help other eco-friendly schemes in the local community after receiving a furious backlash from residents in South West London.

Among those to complain was local man, Daniel Corker, said: ‘This is absolutely disgusting behaviour.

‘No apologies in the world will ever put this right. They have absolutely ruined 11 beautiful healthy trees so they can show off their rubbish cars and their big bulky vans.

‘What about the wildlife? Where Are they going to go now?

‘I suggest people educate themselves before they cut down trees.’

A spokesman for Merton Friends of the Earth added:  ‘We are saddened by TrustFord’s decision to cut down 11 mature trees at its Plough Lane dealership.

‘They are a real loss for local biodiversity, carbon sequestration and cleaner air.

‘We’re calling on Merton Council to look into this and take appropriate action.’

As well as apologising, TrustFord have pledged to plant a series of semi-mature silver birch and London Plane trees.

The end result will be more trees than were originally at the site.

They are also planning to plant trees at all of their sites next year to celebrate the Queen’s jubilee.

Julia Greenhough, Marketing and PR executive for TrustFord, said: ‘Before we acquired the site at Wimbledon we got the insight that large transporters had been refusing to come on site because their was no visibility for them as they were turning out on the road.

‘This was flagged up specifically around health and safety and the decision was not made to make the cars on the forecourt more visible.

‘Also of our own volition we have committed to replant trees and shrubs, replacing the lines with silver birches and London planes – which are strong anti-pollution trees.

‘We are now actually planting more trees than we’ve taken out and have plans to plant trees at all sites across UK next year.’