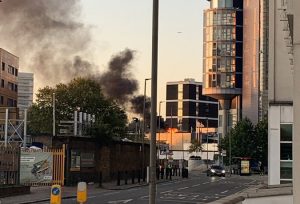 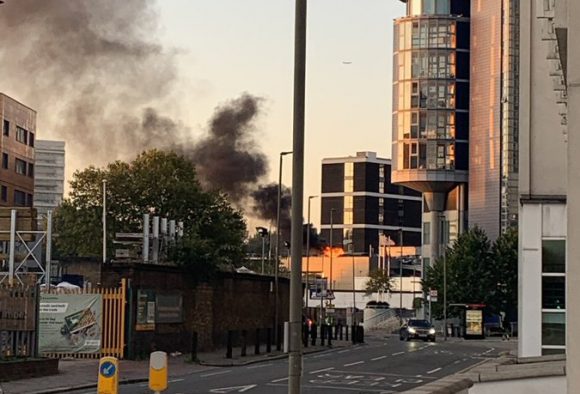 TWO employees were taken to hospital by ambulance after suffering smoke inhalation when a fire broke out at a Land Rover dealership in London.

Four vehicles worth thousands that were in the roof car park at Land Rover Battersea were destroyed yesterday morning.

Six fire engines and around 40 firefighters were called out to the dealership at 7.16am said London Fire Brigade, which had the blaze under control by 8.22am. 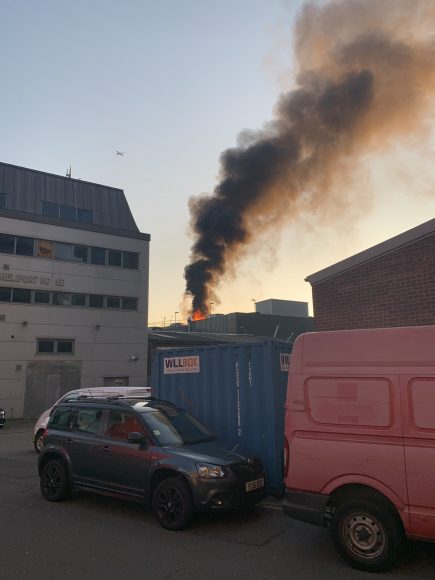 The flames at Land Rover Battersea can clearly be seen as smoke stretches into the sky. Picture © Simon Allison

The cause of the blaze at the Lookers-owned dealership in Lombard Road is under investigation.

A plume of smoke rose into the sky and spread around the area, which also saw rush-hour traffic chaos.

London Fire Brigade said two people were treated for slight smoke inhalation at the scene and taken to hospital as a precaution by London Ambulance Service crews.

Mail Online quoted a dealership spokesman as saying: ‘We can confirm that two of our colleagues suffered minor smoke inhalation.

‘We will now follow our protocols and processes and consult with the appropriate authorities to understand the cause.

‘We would like to commend the swift action of the firefighters, who arrived within minutes to quickly handle the situation. We would also like to reassure our customers that we remain open as usual and apologise for any inconvenience this incident may have caused.’

Four cars were destroyed in a fire on the roof car park at a at a car showroom in #Battersea. Six fire engines and around 40 firefighters attended the scene https://t.co/xuR45FnaAv © @simonjallison pic.twitter.com/KFLzCzOT1P

All pictures by and copyright Simon Allison