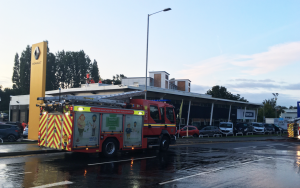 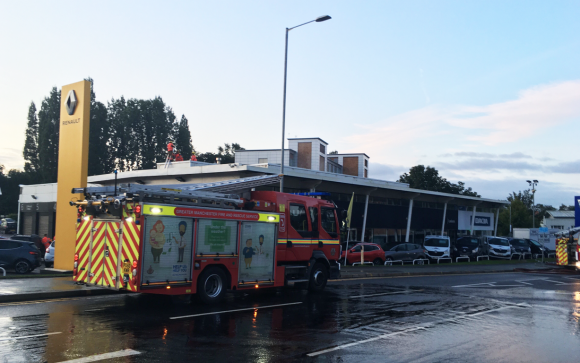 Crews battled the fire from both the inside and outside the building after being called to the showroom in the town’s St. Mary’s Way shortly after 1am. The road was closed as the drama unfolded.

The fire had started in the servicing and parts area and crews managed to contain most of the blaze to that area, saving a significant part of the structure.

Fire investigators will be liaising with police to determine a cause.

Greater Manchester Fire and Rescue Service said: ‘We will remain at the scene for a number of hours and the closure of St Mary’s Way remains in place. We are working closely with Greater Manchester police and Stockport council to re-open the road as soon as possible.’

Thanks to the hard work of our crews through the night, the fire in St Mary’s Way, Stockport is now under control and a significant part of the building has been saved👏

‘Crews were focused on protecting the assets inside the building and the majority of the fire was contained to the services and parts area. Thanks to their hard work, a significant part of the building was saved.

‘Fortunately, the fire happened in the early hours of the morning and this was when the smoke was at its worst. Most of the smoke has now gone and there are no wider concerns.’

Issuing advice to local residents, he said: ‘If there is a smell of smoke, ventilate your house, there will be no long-lasting effect.’

MORE: The 69 plate is launched with some sauciness in the mix