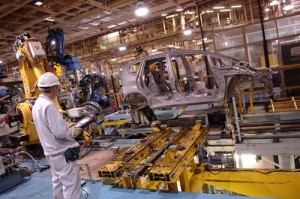 The variety of cars produced in the UK has been impacted by significant changes in export destinations since 2009, with one vehicle rolling off the production line every 20 seconds.

While the European market has struggled with tough economic conditions, overall export volumes have rocketed due to strong growth in demand for UK-built cars in other countries.

According to the SMMT, industry analysts predict production output to reach record levels of around two million units by 2017, in which the UK could become the third-largest car manufacturer in Europe.

Business secretary, Vince Cable, added: ‘Our success lies in the appetite from countries around the world for British cars. Around 80 per cent of the 1.5 million cars we produced last year were exported – a testament to the diverse, high quality of British manufacturing.

‘It also highlights the benefits of industry and government working together and we want to continue this partnership through a long-term strategy. This will give businesses the confidence to invest, speed up development on vehicles of the future and keep the UK as a world leader in cars. Our investment of £1bn jointly with the industry will help do this, while also delivering jobs and driving growth.’

Commenting on the SMMT figures, John Leech, KPMG’s UK head of automotive, said: ‘The UK car industry is in confident mood, especially the car component suppliers and manufacturers, as its key export market, the EU, continues to recover. Most analysts are now forecasting EU car sales will grow in 2014, reversing six straight years of falls.

‘We expect the UK market to rise by approximately five percent this year, though not as quickly as we witnessed in 2013. Our forecast is that UK production will continue to rise from the export demand from emerging markets this year, 2015 and 2016 before peaking in 2017 at 1.9 million vehicles.’

He added: ‘In the next 12 months, the UK car industry will see huge increases in job creation with a number of manufacturers launching new models, including Jaguar, BMW/Mini and Nissan. The manufacturers have already outlined plans to increase workforces substantially which is welcome news for the UK economy.’