A used car dealer has been jailed for life for his part in murdering a mum and her four-year-old son by setting their house ablaze over a £400 drugs debt.

The fire killed Gina Ingles, 34, and Milo Ingles-Bailey, with her body found crouched over her young boy’s, as if she’d tried to shield him from the devastating fire, Lewes Crown Court was told.

Jacob Barnard, 32, previously of Spring Steps, Winchelsea, who ran a business buying cars in the UK before selling them in Portugal, must serve a minimum term of 36 years. Andrew Milne, 42, a furniture remover, will serve at least 34 years.

Both were found guilty on Thursday (May 27) of two charges of murder. They were also convicted of the attempted murder of Ingles’ partner Toby Jarrett, who managed to escape out of a first-floor window but was badly injured, suffering serious burns, and ended up in an induced coma.

The body of a dog the family were looking after for a friend was also found next to the mother and child.

The blaze was started late at night on July 10, 2018 after petrol was poured through the front door at the home in Eastbourne and ignited. Firefighters found a burning fuel can outside the front door of the house, and this became a vital piece of evidence.

Jayne Ingles, whose daughter and grandson died, said her family would ‘never understand’ what happened.

In a victim impact statement read out by the prosecution, she said: ‘I still close my eyes and imagine Gina waking to find the house on fire.

‘Today, even as justice is done, it doesn’t really change a thing for us. It doesn’t bring Gina and Milo back to us.’

Mrs Justice Philippa Whipple described the suffering of Ingles and Milo, saying: ‘They must have been terrified in their last moments as smoke and fire engulfed them.’ 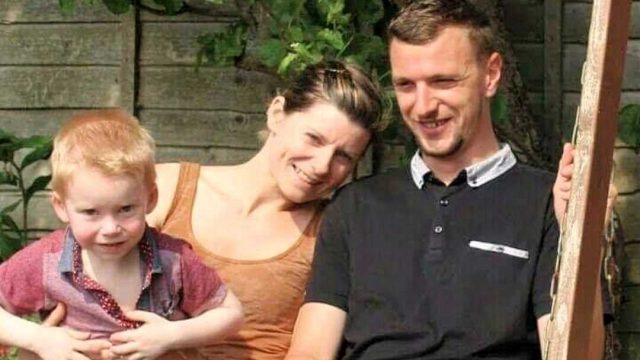 Passing sentence yesterday (May 28), she said Barnard and Milne ‘gave no warning’, adding: ‘This was murder for gain, to send a message to other drug debtors, which makes the offence the more serious.

‘This was a crime under cover of darkness, a crime of stealth and cowardice. They lit the fire and then disappeared into the night.’

Police told how during their investigation, a witness said Milne had helped Barnard with starting the fire. The pair are believed to be the two men seen on CCTV walking away from the inferno.

DNA recovered from the burning fuel can matched that of Milne, who is believed to have acted as Barnard’s enforcer, collecting unpaid debts, sometimes by force.

The deliberate fire at the home in Croxden Way was Barnard and Milne’s way of enforcing a drugs debt of about £400, according to police.

Barnard was also a drug dealer, according to a BBC report, and he and Milne hatched their plan after growing frustrated with Jarrett, who owed £400 to a local drug dealer who in turn owed money to Barnard.

A police raid on Milne’s address in Wilmington Road, Hastings, uncovered machetes, knives, a Taser and a balaclava.

Barnard had fled to Portugal, where another man, John Tabakis, had driven a Mercedes ML270 that was used during the attack on the house, but police pursued and interviewed Barnard.

According to the BBC, Barnard is serving eight years in a Portuguese jail for possessing weapons and drugs but will now serve his sentence in the UK.

Tabakis, 31, was convicted of perverting the course of justice and will be sentenced at a later date.