Two have told Car Dealer how they saw cars advertised at Cap Clean prices on the Cazoo website while similar models were selling at auction for thousands of pounds more.

Chris Middlehurst, of Middlehurst Garage in St Helens, posted about buying stock from Cazoo on Facebook after he found a Nissan X-Trail slashed in price by the online-only retailer and advertised at thousands of pounds below today’s retail value.

‘We’re in a crazy market where the consumer can buy a car cheaper than the trade can,’ he told Car Dealer.

Middlehurst Garage specialises in used Nissans but, like the rest of the industry, has found auction prices are spiralling out of control so has begun looking at other options to source stock.

Middlehurst said: ‘I was just looking around for stock. I’ve been trying to buy little and often because I just don’t think the cars are worth what we’re seeing in the auctions.

‘I thought I’d have struggled to sell it at that much.

‘I ended up buying the car [from Cazoo] for a bit of a laugh. I saw the car advertised on Facebook and clicked through to see it was a seven-seater, one-owner with 15,000 miles and I thought, what’s the catch?

‘I did a check on it, it’s price was Cap Clean and I could have it delivered to my house for free.’ 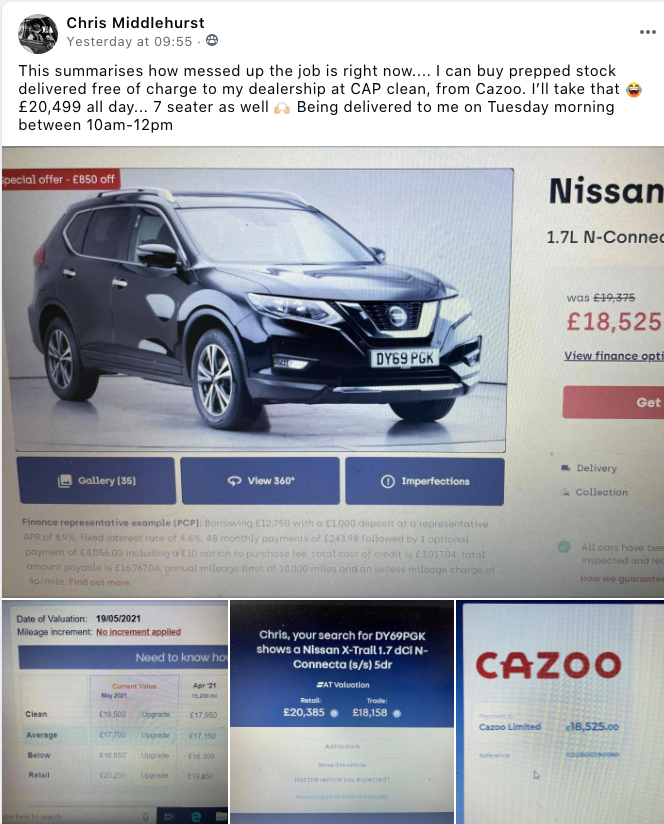 Middlehurst pointed out that Cazoo aren’t the only retailers he’s seen with cars advertised with low retail prices, citing other car supermarkets as also offering some stock at ready to retail trade prices in the current market.

He’s also not alone in buying from Cazoo, with one other dealer group boss telling Car Dealer he’d instructed his used car buying team to look at the website.

The second dealer – who did not want to be named – said he spotted a VW Golf that was advertised at Cap Clean price, but he knows these models are selling for well in excess of that on forecourts.

He said: ‘It’s crazy that I can go on to the Cazoo website and buy one of their cars knowing that I can sell it for more.

‘Who is doing the pricing? The Golf I spotted has been on there since October and the price is way too cheap – I’ll buy it and sell it for way more.’

Head of valuations at Cap HPI Derren Martin said that he had heard similar stories, with one car supermarket having had an offer to buy all models it had in stock of a certain profile by a franchise dealer. However, they refused to sell.

He said: ‘I know there are a lot of dealers looking on retail websites as they would normally do and buying from private advertisers.

‘At the moment many retailers are advertising cars that they bought when trade prices were cheaper, so when it comes to replacing those cars they won’t be able to do that for anywhere near what they paid for them a few weeks ago.’

Cazana director of insight Rupert Pontin echoed this, and said that in these cases it’s likely these dealers have become ‘a victim of their own policies’.

He said: ‘I think some of this comes down to stocking procedures at some dealerships. Dealers have stocking policies where if a car has been in stock for so many days they’ll knock the price down until it sells.

‘I’m not surprised it’s happening, but I think it’s probably happening in less volume than these Facebook posts would lead us to believe.

‘Cazoo are pretty good with their pricing, to be honest, they are competitive and they look at a variety of different data sets including our own.

‘If you look at the original price it is still a bit lower than where we see the market but for the days in stock then I would expect them to do that under whatever stock turn policy they have in place.’

More Used Car stories can be found in our dedicated section.