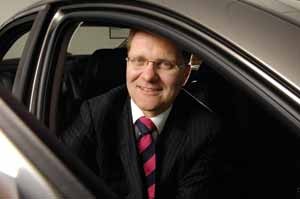 VERTU Motors plc has bought a dealership in Sheffield, which sells Nissan and Volvo cars, from Harratts of Wakefield.

The assets acquired include a freehold property valued at £1.75m and the value of the whole deal is in the region of £2.4m.

Vertu Motors Group now operates a total of 106 sales and aftersales outlets across the UK.

Robert Forrester, CEO of Vertu, pictured, said: ‘We are delighted to announce the next step in our growth with both Nissan and Volvo. This is the first time the Bristol Street Motors brand has been represented in the city of Sheffield, which is the fifth largest in the UK.

‘The new outlets will complement existing group businesses in the region in Barnsley, Doncaster and Chesterfield, and brings the number of outlets in Yorkshire to 12.

‘We are continuing to develop the group by adding to existing franchise relationships as well as exploring new manufacturer partners. This acquisition will enable us to continue to generate profitable growth for our shareholders.’

Shaun Harratt, Managing Director of Harratts, said: ‘An offer was made for our Sheffield operation, which we decided to accept. It refocuses our business to a predominantly West Yorkshire offering, which traditionally has always been at the heart of our operation.

‘We would like to wish Vertu continued success with two great brands at the Sheffield dealerships.’