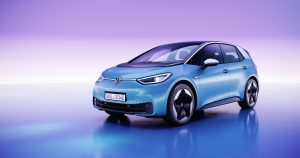 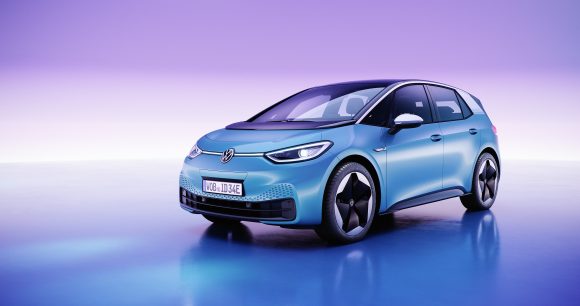 Just over 10,500 ID.3s were registered in Europe during the month, pushing the Renault Zoe to second (9,778) while the Hyundai Kona finished third with 5,261 units.

Jato said the ID.3’s success was mostly due to fleets and businesses placing orders.

The Volkswagen Group became Europe’s biggest producer of EVs in October, making up 25 per cent of registrations.

Pure electric cars’ share of the European car market were up by 197 per cent in October, topping 71,800 registrations.

EVs in general (which includes pure electrics, plug-in hybrids, pure hybrids and mild hybrids) totalled 302,587 units and took a 26.8 per cent share of the market, outselling diesels (26.3 per cent).

The overall best-selling car in Europe was the Volkswagen Golf, however, with 27,530 units. The Renault Clio finished second with 22,588 and third place went to the Opel/Vauxhall Corsa with 21,220.

The Toyota Yaris, meanwhile, led the Hybrid/Mild Hybrid chart and the Mercedes A-Class topped the Plug-in Hybrid board.

October overall recorded a fall of seven per cent to 1,127,624 units compared to the same month last year, and down to the same levels seen in October 2018.

Year-to-date figures stand at 9.7m units – that’s down by 27 per cent compared to the same period a year ago. 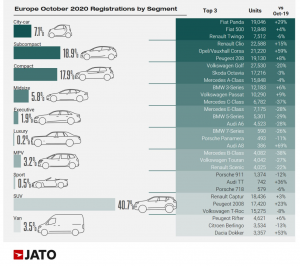 Jato Dynamics warned the European market is ‘not yet out of the woods’ but that October’s fall was the second smallest decline this year, demonstrating that ‘there are still reasons to be positive’.

Felipe Munoz, global analyst at Jato Dynamics said: ‘Similarly to the demand seen for the Tesla Model 3, the Volkswagen ID.3 is another example of how appetite for competitive and stylish electric cars continues to grow day by day.’

He added: ‘Volkswagen Group is catching up to its peers at great pace, in part due to its strong presence in Northern and Central Europe, where appetite for EVs continues to grow.’