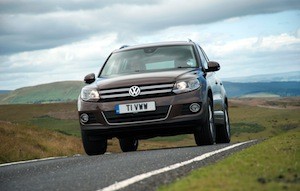 VOLKSWAGEN is to recall 2.6m cars worldwide due to various technical problems – more than 60,000 of which will be in the UK.

The German manufacturer will recall 800,000 Tiguans built between 2008 and 2011 worldwide due to a fault with an electrical fuse and leaky fuel pipes.

The firm said in ‘isolated cases, a fuse may trip in the Tiguan, thus resulting in the failure of one of the two vehicle light circuits’.

According to Volkswagen, this could affect up to 30,000 Tiguans in the UK. ‘The recall will definitely affect the UK, but we still don’t have confirmed figures at this moment,’ a VW spokesperson told Car Dealer. ‘The news has only been launched on an international basis, but we’re expecting 30,000 recalls in the UK.’

Volkswagen said affected vehicle owners will be informed in due course and replacing the fuse with a tougher surface coating will only take a few minutes.

A further 1.6m vans are to be recalled worldwide due to faulty drivetrain issues, after it was discovered in China and South East Asia that vehicles with a seven-speed dual-clutch DSG gearbox could suffer from electric malfunctions in the gearbox power supply if synthetic gearbox oil is used.

Volkswagen has decided to launch a global voluntary campaign and requests that all customers who have a van with a seven-speed dual-clutch gearbox filled with synthetic oil should visit a workshop for an oil exchange.

‘At this stage, we believe the recall of vehicles with a seven-speed DSG gearbox could affect a further 30,000 vehicles in the UK,’ the spokesperson added.

Meanwhile, Amarok pick-ups with a 2.0-litre TDI are suffering from fuel pipe leaks within the engine compartment.

Roughly 239,000 Amarok models built between its launch and June this year will be affected globally, 4,279 of which are in the UK.

To prevent further damage to the fuel lines, a chafe protector is being fitted to the affected point as part the global recall campaign.