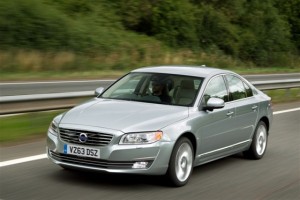 VOLVO will not abandon the luxury saloon car market any time soon, according to Volvo UK boss Nick Connor.

Despite registering a paltry 514 units of its posh S80 saloon last year, Connor was adamant the Swedish car maker would not axe the model or abandon the luxury saloon car market over the coming years.

‘We will not stop selling the current S80 and it will still remain in production for the foreseeable future,’ Connor exclusively told us. ‘We don’t have much heritage in the large saloon market. However, people who own the car rate it very, very highly and actually we have a very strong and loyal customer base who like what it offers. But it is not a huge seller.’

Connor said that it was not Volvo’s intention to stop offering a large saloon in the marketplace. ‘I think a lot of people have been predicting the demise of the large saloon market for as long as I can remember, but it is still a huge global segment,’ he told us. ‘Lots of people will stray into SUVs, big and small, but we absolutely believe there is a place in the market, especially in the UK, for large executive saloons so we are not going to be stepping out of that bit of the market.’

He admitted that Volvo will need to change its direction when it comes to taking on the BMW 5 Series and Mercedes E-Class when the current S80 is due for replacement.

‘We will have a challenge when we eventually replace the S80 as we will need to go out and catch some more market share,’ he said. ‘I think we need to reinvent our position in the saloon market – we have done pretty well with the S60 thanks largely to the recent facelift and new powertrains.

‘But people have to have a reason to buy a large Volvo executive saloon rather than going for the more obvious choices of BMW, Audi and Mercedes. We could give them that, but frankly the current car, as good as it is, hasn’t persuaded enough people to consider it.’

According to SMMT data, compared with the 514 S80 units Volvo sold last year, its nearest rival, BMW, registered 20,552 units of its 5 Series.