Home > Car News > We drive the upcoming Nissan Ariya but is it worthy of spearheading the electric revolution? 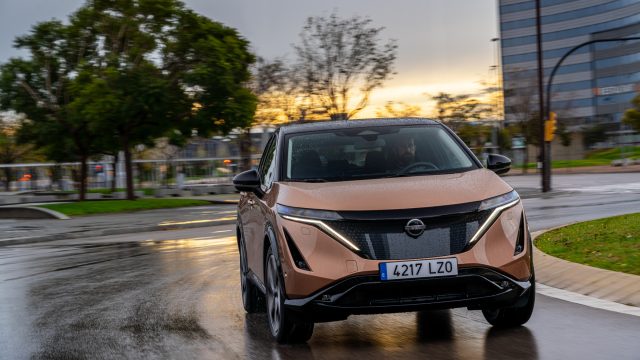 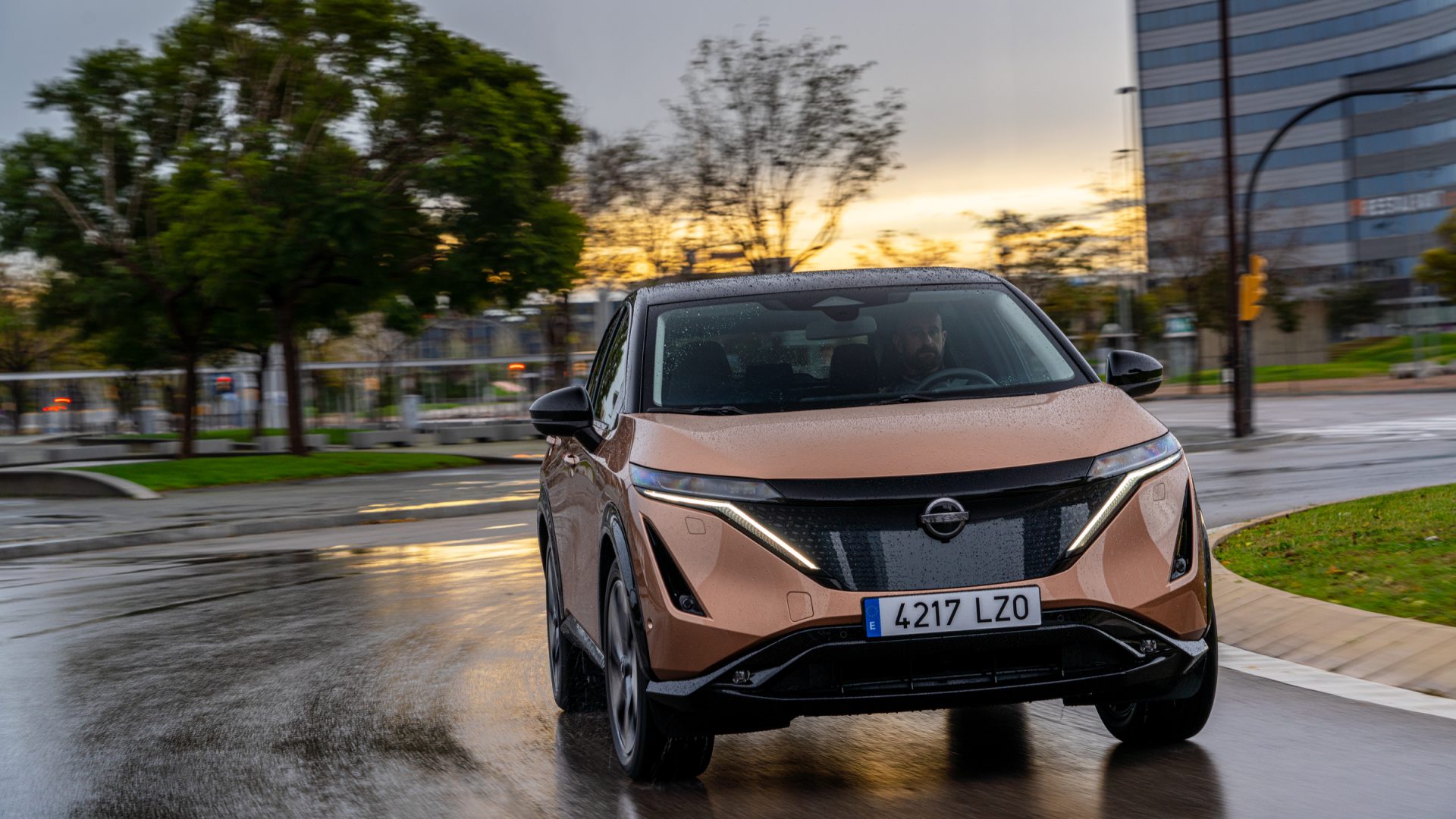 We drive the upcoming Nissan Ariya but is it worthy of spearheading the electric revolution?

Nissan is hoping that its much-anticipated Ariya will do for mainstream EVs what the original Qashqai did for the family car market and create a new benchmark for electric cars everywhere.

The model is currently in its final development stage in Europe before arriving at dealerships later on in the year, but is the Ariya up to the task of spearheading the electric revolution?

To find out, we sent our man Darren Cassey to the Jarama circuit in Spain, where he got behind the wheel of the prototype car.

Here is what he had to say about it… 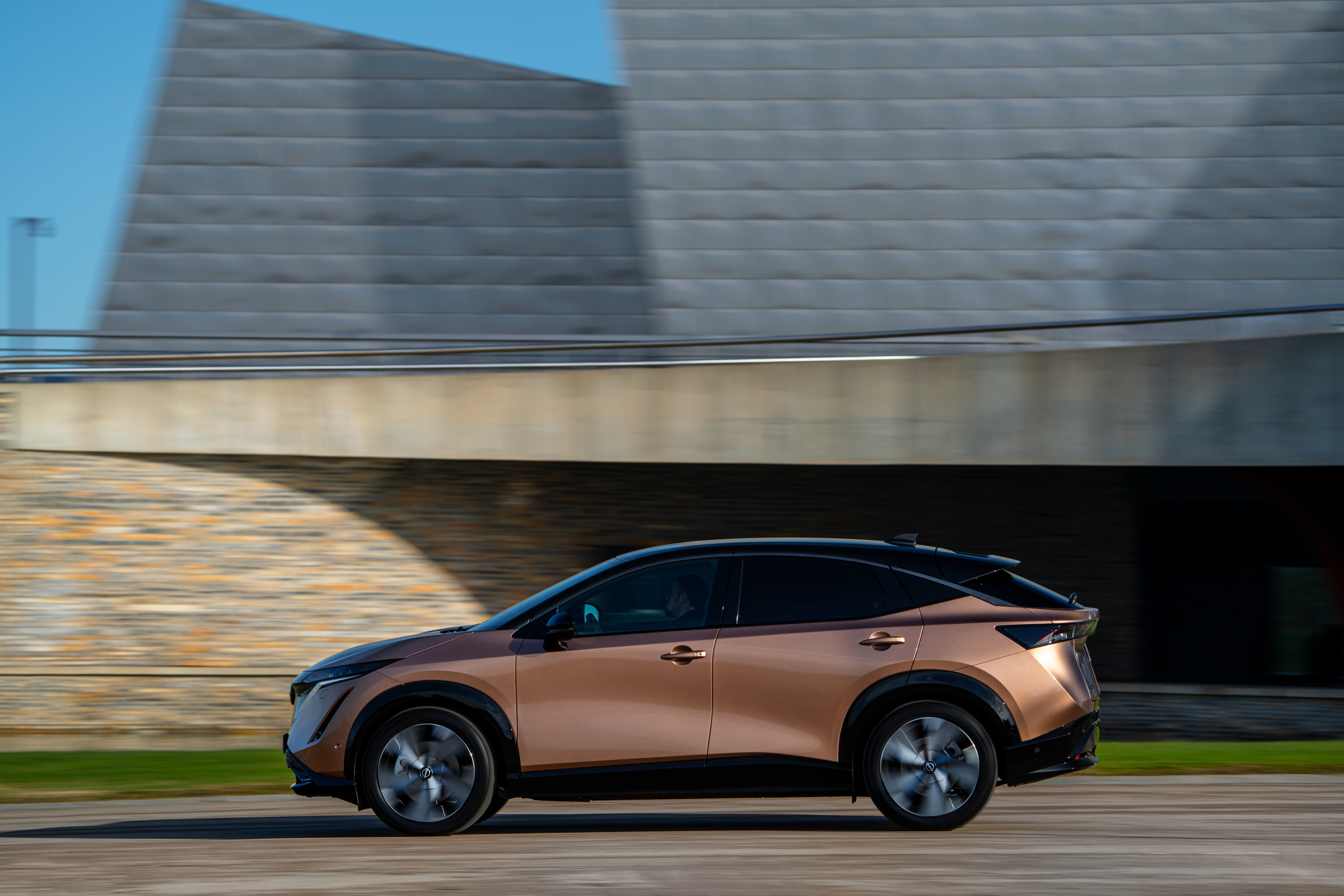 If you look closely you can see more than a hint of Qashqai about this EV – the front end in particular looks like a smooth, ultra-modern interpretation of the latest generation of the ubiquitous crossover.

However, under the skin it’s completely different, sitting on a new platform designed specifically for EVs.

Higher-spec models are available with a new four-wheel-drive system called e-4orce. Aside from the awkward name, it’s actually a very clever and useful bit of kit. It can use the electric motors to adjust power delivery to the wheels and control body movement, resulting in a smoother ride. 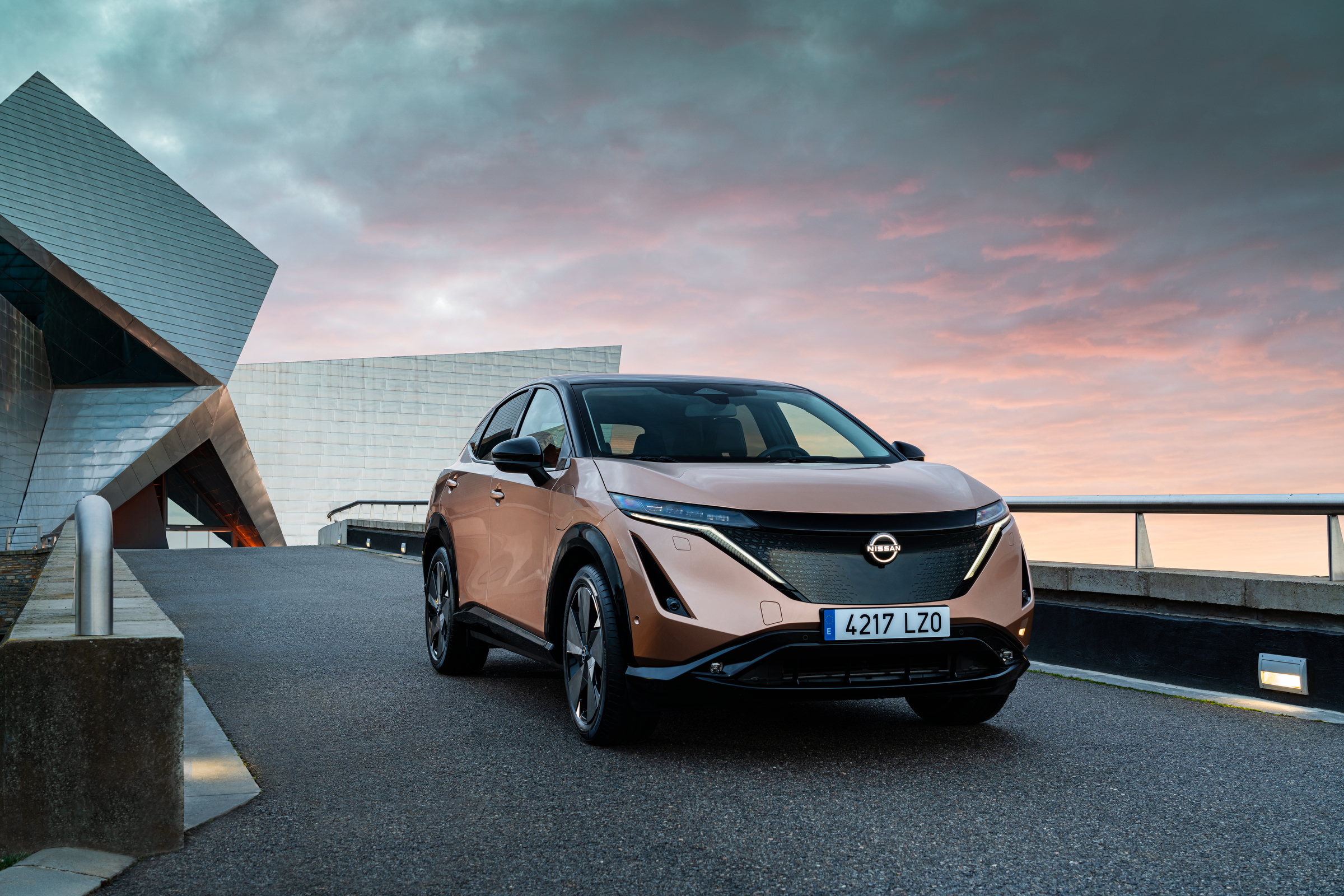 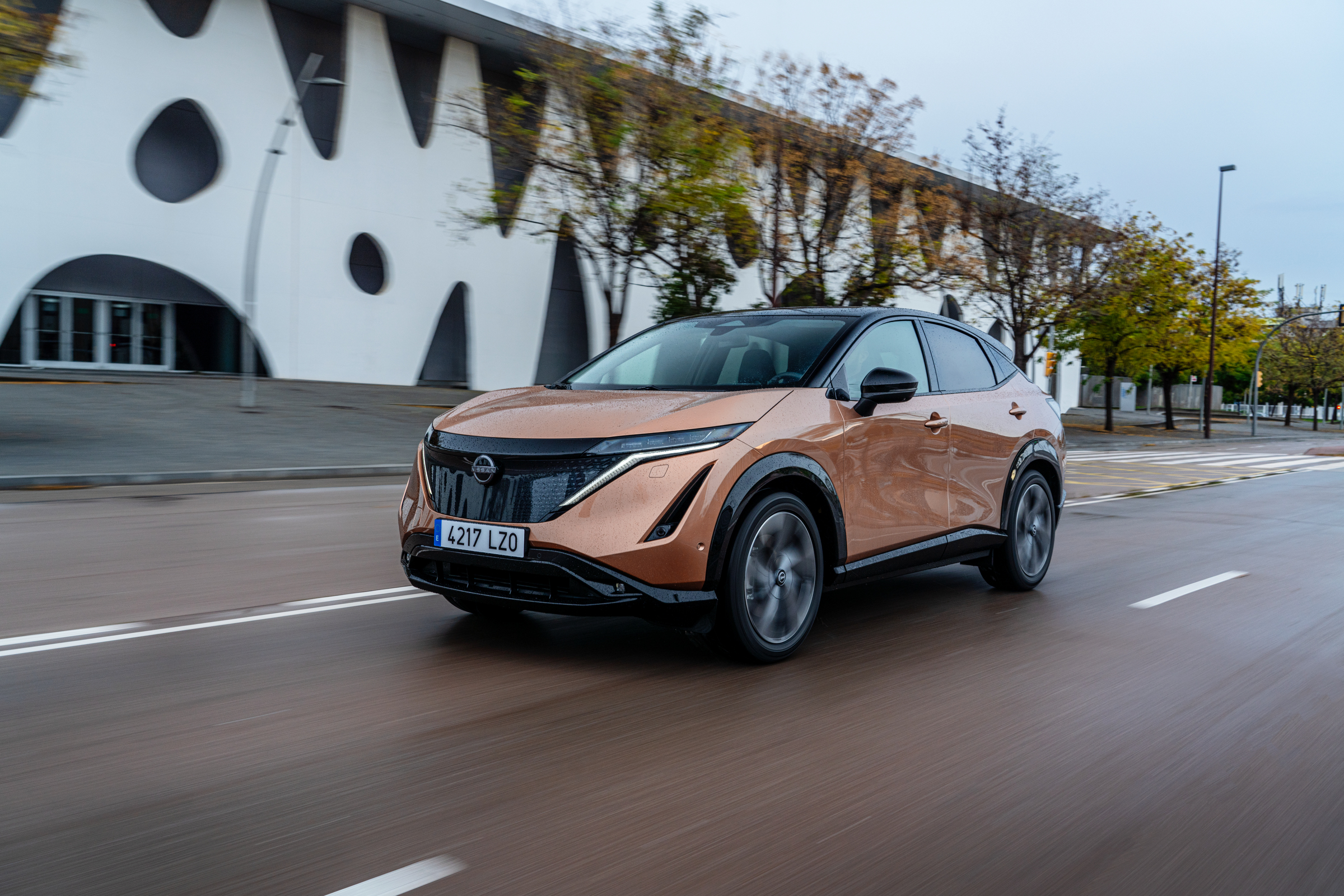 With this being a prototype we couldn’t take it on public roads, and silky smooth race tracks tend not to show up any issues with comfort, so we’ll hold back comments on that until we’ve tried the full production version.

That being said, we can comment on the general feeling of the powertrain, and in this regard it’s highly impressive. Acceleration is fast and smooth, with a clear tuning of the motors to smoothly deliver power rather than hand out the aggressive punch that has characterised many recent EVs.

In its sportier modes the Ariya certainly shifts along, though, providing impressive acceleration from about 30mph to motorway speeds. The steering is well-judged, too, feeling light enough to give the driver confidence in the car’s movements without feeling disconnected. 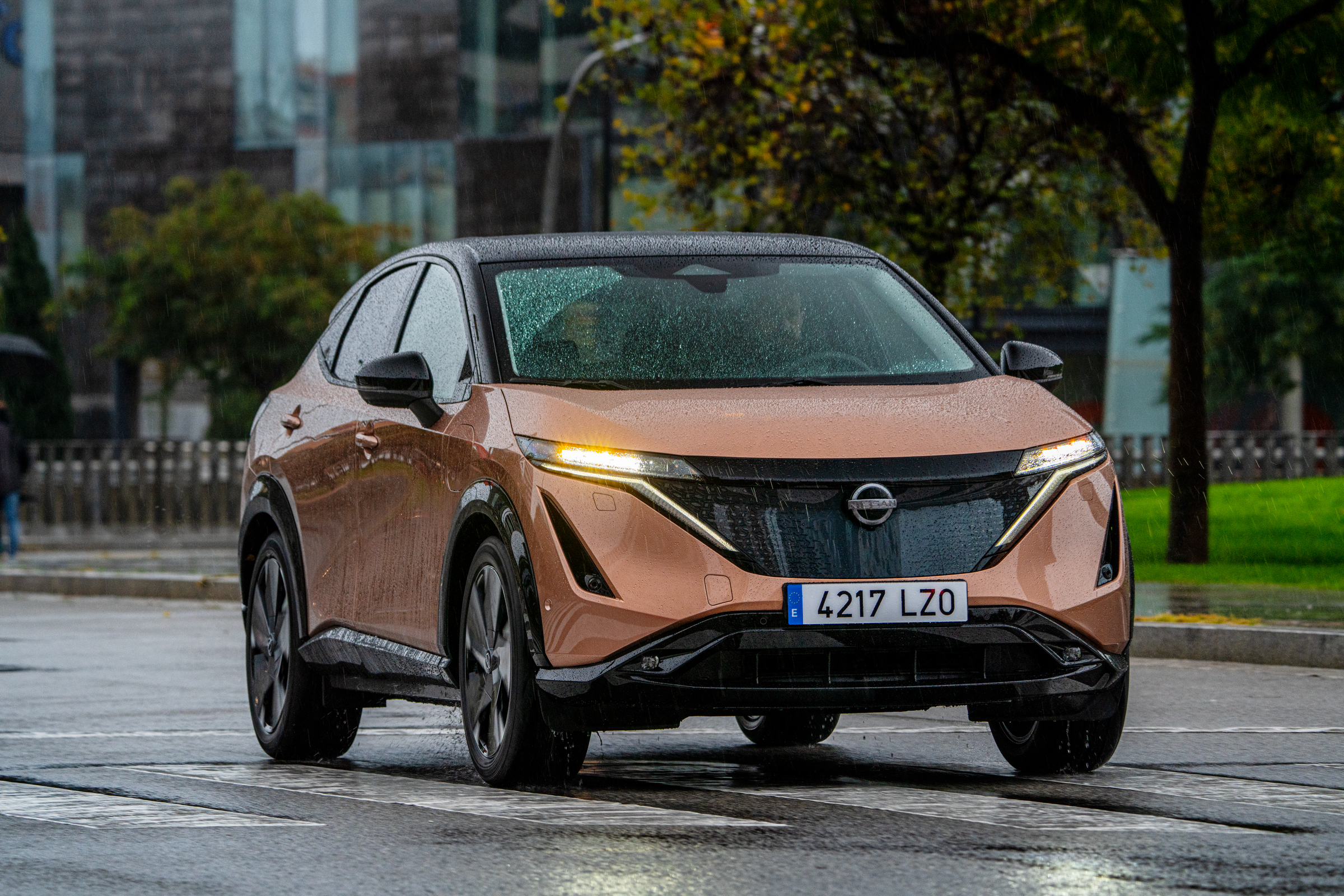 We’re really enjoying this recent trend from car manufacturers making their EVs look all sleek and futuristic, and the Ariya is the latest beneficiary. The SUV shape can be saved by details but is often betrayed by the boxy silhouette, but the sloping rear seen here gives the Ariya a more streamlined appearance.

The front end is imposing without looking intimidating, thanks to its slim headlights and running lights, prominent grille and smooth bumpers. The rear has also avoided fussiness and is all the better for it, with full-width LED lights completing the ultra-modern look. 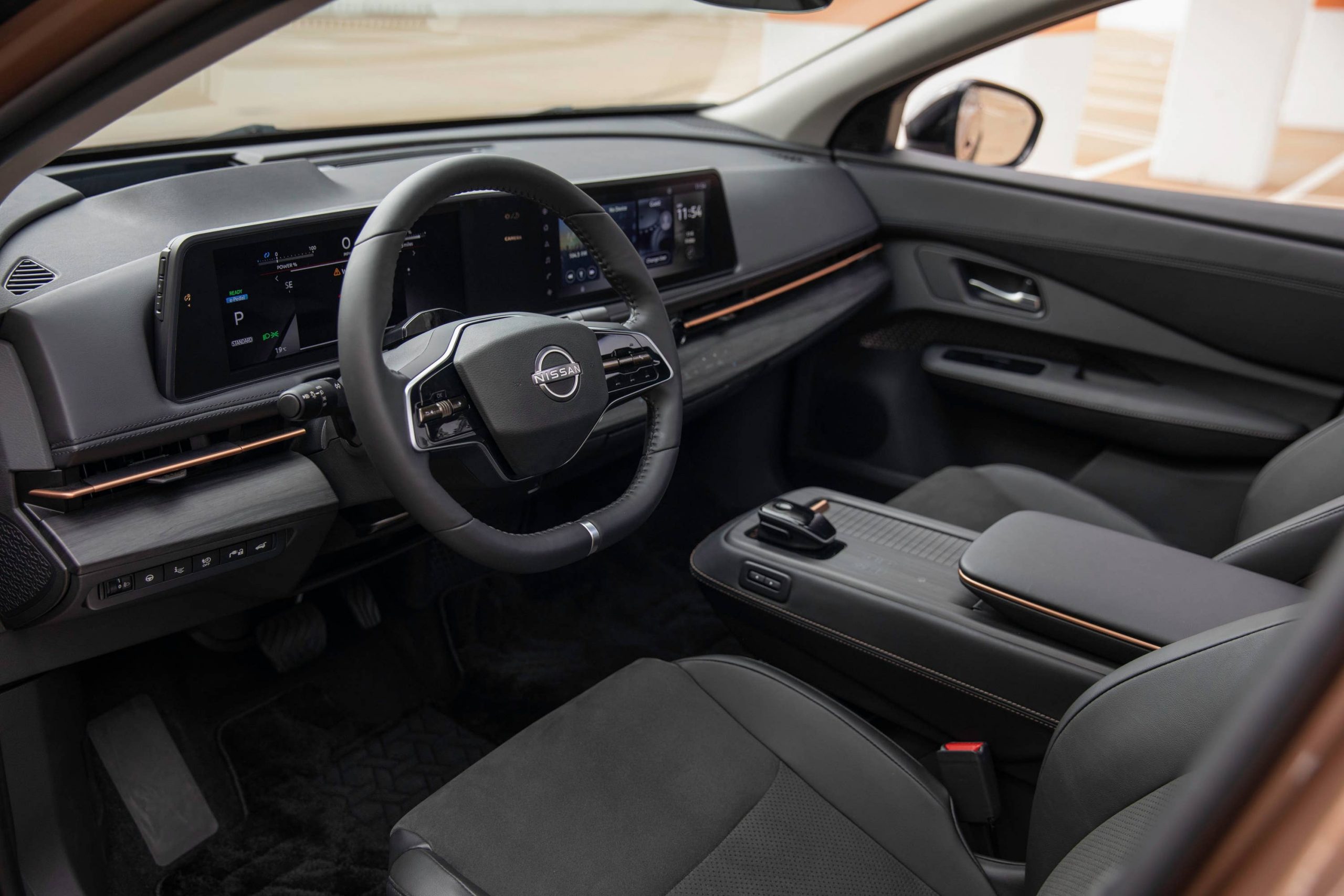 Nissan has done a great job of bringing the Ariya’s cabin upmarket. There are high quality, soft-touch materials throughout and the general ambience is excellent. The design is subtle and minimalist, with interesting textures throughout.

The twin-screen set-up that includes the infotainment and instrument displays looks great and works well, though the graphics are a little more cluttered than the sleek cabin.

However, there are a couple of complaints. For a start, the dashboard juts out in the middle, just at knee height for taller drivers, who can’t get too close to the steering wheel. Meanwhile, between the driver and passenger are awful haptic buttons that need a firm push to activate, making quick use tricky. Oddly, similar buttons on the dashboard work much better, responding to a tap. 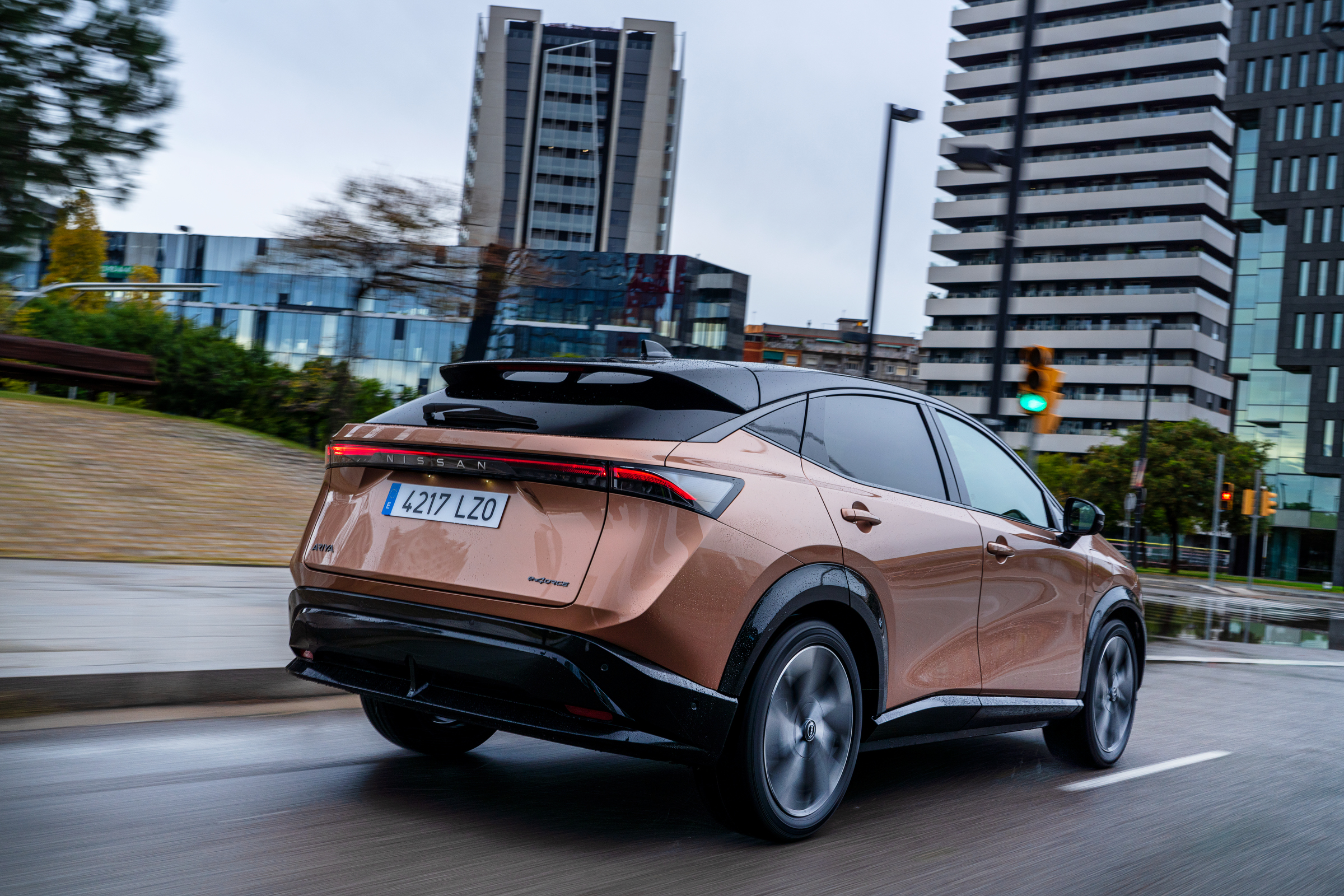 Although we were only testing a prototype, orders are open in the UK so we do know the final specifications on offer.

Prices start at £41,845 for the smaller battery and lower-powered Advance trim, which gets black synthetic leather upholstery with fabric inserts and 19-inch alloy wheels, with the 22kW charger standard on all models but this one, where it is an £895 upgrade.

The Evolve trim is available in two-wheel drive and all-wheel drive, priced from £51,090 and £53,790 respectively. 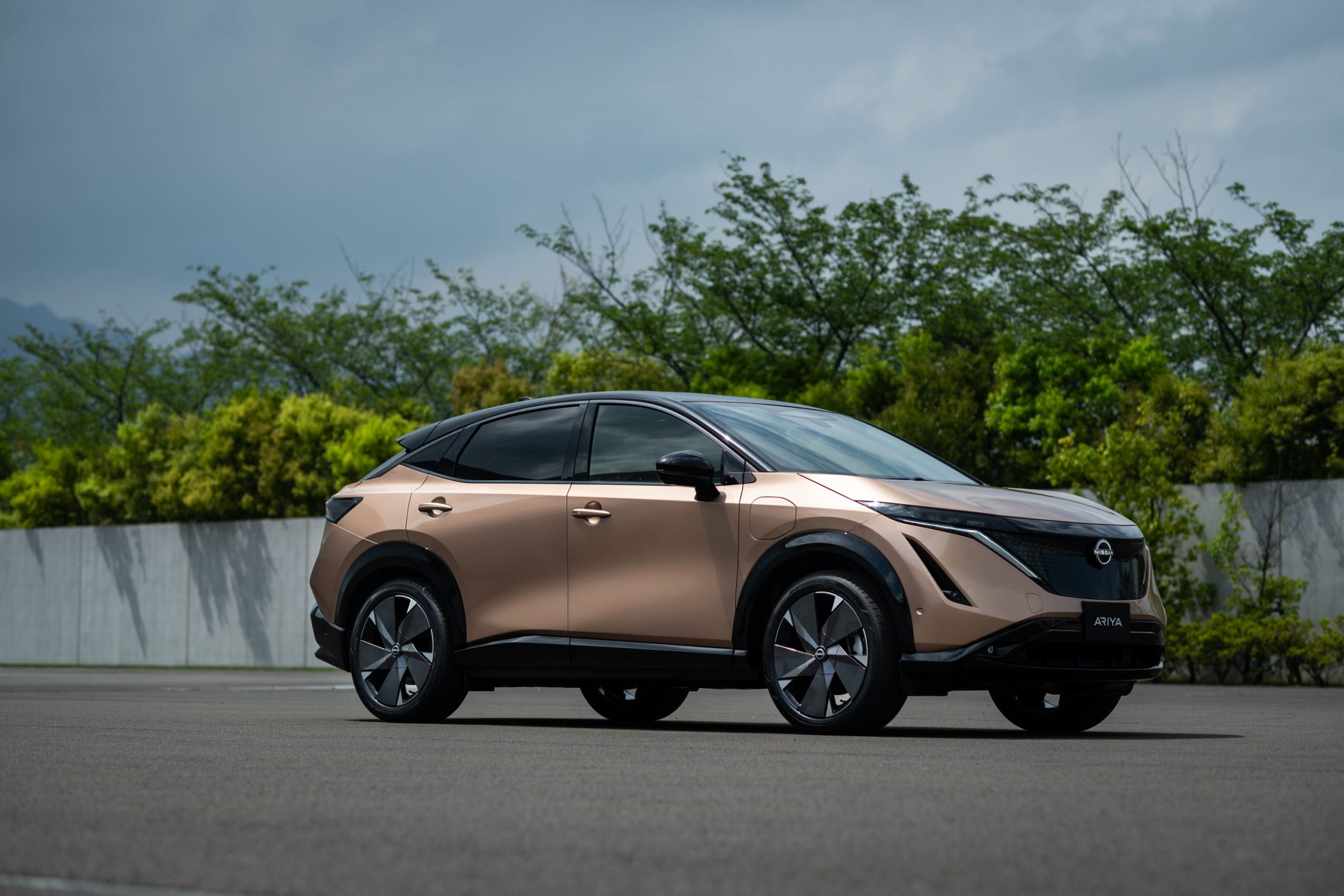 It’s difficult to give a definitive verdict when driving a pre-production model, but all the signs point to the Nissan Ariya being an excellent electric crossover. We didn’t get to test its comfort levels on the road but the powertrain is smooth with enough performance to keep most keen drivers happy.

It’s stylish too, and aside from a couple of grievances the cabin is upmarket, modern and spacious, making it a pleasant place to sit.

It’s unlikely the Ariya will prove quite as revolutionary as the Qashqai, but there’s no denying that it will be hugely popular in the family EV market.