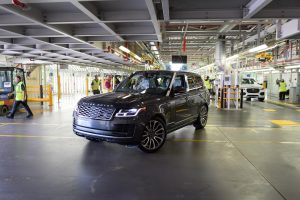 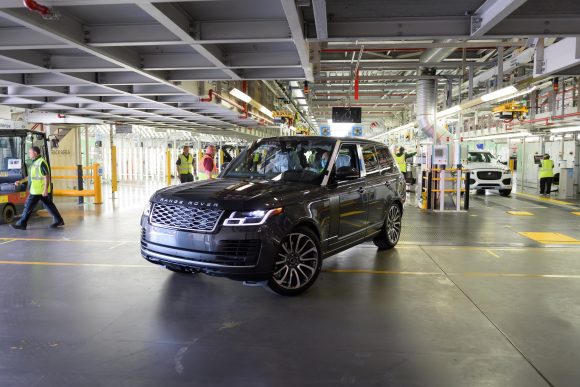 Figures from the Society of Motor Manufacturers and Traders (SMMT) showed factories churned out just 64,729 vehicles last month – a 41.4 per cent decline compared to October 2020.

It was the fourth straight month of decline and the weakest October since 1956.

The SMMT said UK plants were hit heavily by the global shortage of semiconductors which led to production stoppages, and the figures are ‘exacerbated’ by the closure of Honda’s Swindon factory in July – a deficit that will impact figures for a year, said the organisation.

Pure-electric, plug-in hybrid and hybrid vehicles made up nearly 31 per cent of all cars made in October.

Pure-electric manufacturing rose 17.5 per cent to 8,454 units, meaning that, so far this year, UK car makers have produced more than 50,000 zero emission vehicles, exceeding the total built in the whole of the pre-pandemic 2019.

Production for domestic and overseas markets fell by double digits in the months, down 37.9 per cent and 42.1 per cent respectively.

Although more than eight-in-ten of all cars made were shipped abroad, most of these (60 per cent) went to the EU.

Overall, however, shipments to the EU fell by a relatively modest 29.2 per cent, while those to Japan were down 57.1 per cent and to the US down 67 per cent.

The latest UK car and LCV production forecast is now below one million for the second consecutive year, but to then recover to over one million in 2022, with the potential to reach 1.2 million in 2024, ‘if competitive conditions prevail’, said the SMMT.

‘Britain’s automotive sector is resilient but with Covid resurgent across some of our largest markets and global supply chains stretched and even breaking, the immediate challenges in keeping the industry operational are immense.

‘Government can help the industry with measures to boost competitiveness in line with global rivals, notably in tackling high energy costs, supporting employment and training, and helping businesses whose cashflow is under pressure from these historically poor production numbers.’

Jim Holder, editorial director, What Car?, said: ‘Estimates suggest the microchip shortage will continue well into 2022, and the industry cannot sustain similar performances like today’s in the long run.

‘Support will be needed, from helping invest in new plants for electric vehicles, to improving business rates and energy prices, as well as reducing trade costs against competitors elsewhere. As the UK transitions towards electric vehicles, this support is more crucial than ever.’

Richard Peberdy, UK head of automotive at KPMG, said: ‘Whilst there are fewer cars leaving the factory, those that do are selling, quickly, and with less discounting than historically required.

‘Demand continues to outpace supply, and by the time these supply chain issues ease there will likely be a lot of pent-up demand to be met on forecourts.

‘But for now that will still feel a long way off for a number of carmakers.’