Signs that the September 70-plate change could be the biggest ever are continuing as Carwow boss James Hind says all the signs are pointing in the right direction.

In an exclusive interview with Car Dealer, Hind, the founder of the new car buying search platform, said some dealers are struggling to cope with the leads they’re sending out.

With some car dealers still operating with less staff and new car supply restricted by the factory Covid-19 closures earlier this year, many showrooms are struggling to keep up with demand.

Hind said: ‘It’s a bigger month than we would have expected – bigger than last year for sure.

‘There’s some variability between brands and we have some dealers asking for less leads.

‘They haven’t got the staff or bandwidth to deal with it and then we have some dealers – sometimes from the same brands – asking for as many leads as we can give them.

Hind said he is confident this month will end up bigger than last September which saw 343,255 new cars sold.

The Carwow boss said good dealers who were struggling to get hold of new car stock were managing to convert customers into other options to protect the sale.

He said: ‘Great dealers can convert people into something else, maybe a factory order or a nearly new car.

‘Just because someone asks for something doesn’t necessarily mean that’s what they want, that can be swung into something else.’

In Germany, where the government is offering customers up to 9000 euros off a new electric of hybrid car the market is booming.

‘That one is absolutely on fire,’ said Hind. 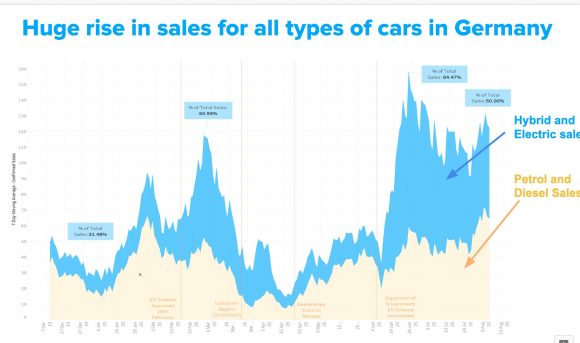 ‘For us we are 250 per cent bigger in the last three months compared to the same months last year.’

In Spain, though, where a government scrappage scheme – similar in style to that introduced here after the last recession – has not hit home with new car buyers. Hind said sales were much slower there.

The Carwow boss has also noticed the transition to digital has been accelerated by car manufacturer and some dealer groups since the lockdown.

He added: ‘We’ve seen it in every industry – that switch to digital, a catalyst for digital, as it was always going that way, but this has just sped it up.

‘We’ve seen that particularly from car manufacturers and their response to it and from some dealer groups.

‘For consumers, that role of the showroom is a bit diminished now and more and more people are doing their homework online and choosing where to buy completely online.’