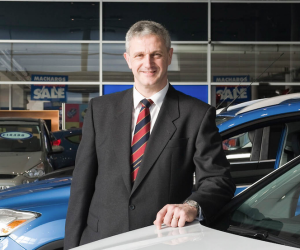 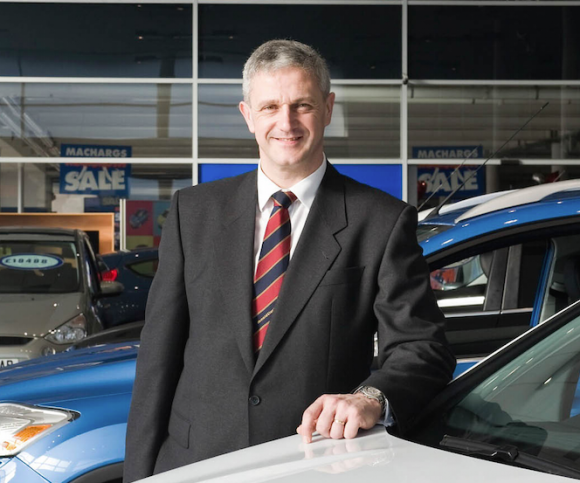 EDDIE Hawthorne is not a car guy. He’s adamant on this. The way a car works just doesn’t interest him. He’s not alone in the motor trade, though – but he does draw the line at cars being just lumps of metal ripe for selling.

‘I’m not a petrolhead,’ he says. ‘Cars are a stock-in trade for me. Don’t get me wrong though, I like a nice car as much as the next person – but just don’t ask me how many miles to the gallon a car does!’ It’s probably a good way to be when you’re the managing director of one of the UK’s leading car dealer groups – Arnold Clark.

The business was founded in 1954 by Arnold Clark (knighted in 2004) after he got a flavour for car selling by purchasing a Morris Ten Four for £70 and selling it for a profit.

He opened the company’s first premises on Park Road in Glasgow and, 60 years later, the business turns over in excess of £3bn and has more than 200 dealerships, 130 service centres, 40 accident and repair centres and 13 parts centres.

Hawthorne’s attitude towards cars isn’t surprising though when you dig further into his history. In 1986 he joined the audit department of Arthur Young, Glasgow, before qualifying as a chartered accountant three years later.

And it was then that he made his biggest career move.

‘What enticed me to Arnold Clark was that I was a frustrated chartered accountant who was the auditor of the Arnold Clark organisation,’ Hawthorne explains.

‘I was doing the audits in 1989 and Sir Arnold said to me: “I’ll see you next year” and I replied: “No you won’t, I’m off to do something else in the industry”.

‘About 25 minutes later he gave me a job and I was starting with him. It’s a day I’ll never forget – I always think he got me a wee bit cheap but he is a good car salesman!’

‘I think we went a wee bit Banzai with acquisitions in 2012, I think we had a bit too much money in the bank’

Hawthorne strongly believes the world of car retailing back in the late-1980s differs little from that of nowadays.

‘There’s no real difference to car retailing – it’s very much the same today as it was 25 years ago,’ he says.

‘There weren’t such strong PCPs around but simpler HPs and personal loans were the thing to sell. There was a slightly higher margin with new cars and fewer quality standards – it was the days before the year 2000 and block exemption changing when everybody was worried about Tesco, Asda and all the big supermarkets coming into cars.

‘But, in terms of treating customers properly and giving them great value for money, nothing has really changed.’

Hawthorne had a leading role in helping the business grow massively during the 1990s and in 1998 he took the top job – the position of managing director.

‘In the early years of me becoming MD, Sir Arnold was very much hands-on,’ Hawthorne explains. ‘I probably was the junior, but as time has moved on and he has become more comfortable with the way I run the business, I have had more leeway.

‘I speak to him two or three times a quarter now and tell him what I would like to do and he is quite happy with it.

‘I have free rein to run the business in the way he taught me to do it.

‘I have always realised and accepted that it’s his trainset and I am merely the train driver.

‘You can do nothing but respect Sir Arnold – he started the business with virtually nothing and it is now one of the leading car retailers in europe.

‘Sir Arnold has taught me how to keep things simple. If you understand what you’re trying to achieve, your staff will understand – and also your customers.

‘That’s not to decry anyone’s intelligence, but the more complex the system, product or offer, nobody understands it.’

That approach seems to be working – last year was a record year for Arnold Clark.

‘2013 was a really good year for us – in fact, it was our best year in our history in terms of car retailing,’ says Hawthorne.

‘We achieved this through a combination of factors – continuing low interest rates and healthy residual values kept used car values and finance rates strong. There was also a large amount of customer confidence.’

But, like many dealers across the UK, Hawthorne was surprised by how successfully the budget Dacia brand gripped customers.

‘We went from a standing start to selling 2,500 Dacias last year.

‘It proves that a price segment and a particular offering can appeal to customers.

‘The only real reservation we had before selling them was the margin we were having to work with – but we have managed to overcome this.

‘We are finding we are selling higher-range models rather than the entry-level cars and we are consequently making more money from them.’

‘Well, we’re trying to increase used car sales,’ he says. ‘We’ve fallen behind our plan for opening up a used car outlet – we currently have 15 of them – and we’re looking for another five this year.’

And that acquisition trend has also been element in Arnold Clark’s success.

The company bought a large number of businesses in 2012 – almost too many, says Hawthorne.

‘To be perfectly honest I think we went a bit Banzai!

‘I think we had a bit too much money in bank – but we had to do something with it.

‘Now, the problem was that while they were very good garages, it takes us about a year to bed them in.

‘Most of them started to perform really well in 2013 and we see that only improving this year.

Hawthorne has a simple rule on his acquisition trail – and it’s one that he stands by.

‘When I’m buying something, I have a five-year payback. Some people ask me what that is and it’s quite simple – whatever I pay for a business or an operation, I have to be able to pay back that investment within five years.

‘The easiest thing to do is to buy something just because you’ve got the money to.

‘The difficult part is running it and incorporating it into your business.

‘It’s a wee bit like eating an elephant one bit at a time – don’t give yourself indigestion by overstretching yourself.

‘That’s the simplest business advice I could give to anybody, because it stops ego and over- inflation. If I can’t make that amount of money back within five years, I am paying too much for it. It’s a very simple business rule that we’ve taken.’

But that’s the business part. What is Hawthorne’s own personal ways of business?

‘I tend to speak to people.

‘I’m on the phone from 7.30 in the morning to eight at night and I speak to all my senior people once or twice a week, and I travel around our sites.

‘I don’t like our head office. I don’t like being behind a desk and would rather be out and about.’