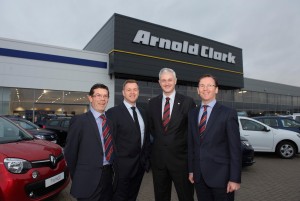 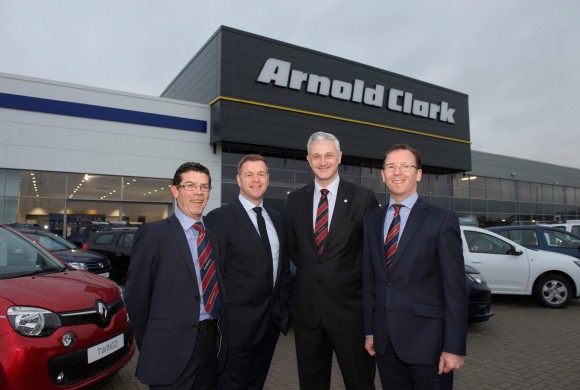 Its previous East Lane Paisley and Pollokshaws Road dealerships have been consolidated into the new dealership, which also has a new and used car display of 400 vehicles and features the new Renault Store concept with interactive car configurator and iPad-equipped ‘Brand Bar’. In addition, there is an 11-bay workshop with the latest diagnostic equipment, EV charging points plus static and automated car wash facilities.

Arnold Clark has represented Renault for more than 40 years, and David Munton, Renault franchise manager at Arnold Clark, said: ‘Our history with Renault together with our desire to improve the facilities of our existing franchises in the area made it a logical decision to incorporate a brand-new dealership into our Hillington development.

‘Our experiences of working with Renault Group have been excellent and we’ve enjoyed a great deal of success with the brand. Its cars are very popular with our customers, the Clio and Megane previously being the best-selling new vehicles in Scotland, and this year alone we expect to sell in the region of 18,000 vehicles across our Renault franchises.’

Darren Payne, Renault Group UK sales director, said: ‘We’re delighted that such an important investor as Arnold Clark has underlined its confidence in Renault and Dacia by not only establishing a new franchise, but also making it the largest of its kind in the UK and acknowledging its importance by incorporating it into its flagship facility.

‘The Hillington franchise is the latest addition to our fast-growing dealer network, and its development by one of the country’s top privately-owned automotive retail groups is a clear indication of how appealing our franchise is. We very much look forward to continuing our successful partnership with Arnold Clark, and with investors like them on board, we are in the best possible position to achieve our plans for sustainable growth set out in our GO5+ strategy.’