Arnold Clark is to drop the Harry Fairbairn name as it seeks to unify the group brand across its franchises.

The UK’s most profitable dealership bought Harry Fairbairn in 2006, adding BMW and Mini to its franchise portfolio.

Originally a small cycling and motorbike business when it launched in 1952, Harry Fairbairn opened its first BMW dealership in Irvine in 1971.

The newly relaunched Mini franchise joined the business in 2001, and there are now nine BMW/Mini branches across the Arnold Clark Group, with sites in Glasgow, Dumfries, Inverness, Irvine and Kirkcaldy, pictured.

Arnold Clark BMW and Mini will launch next month as the Harry Fairbairn name is retired.

‘With the digital journey becoming increasingly important, uniting our franchises under a single name allows us to give our customers the best possible experience across every space.

‘Arnold Clark is a national brand and one that people can trust, so as we move to the future, it helps our customers understand the diverse range of franchises we have to offer, particularly in the premium market.’

Meanwhile, the group is set to open a new showpiece BMW/Mini showroom in Glasgow’s Hillington Park this autumn. 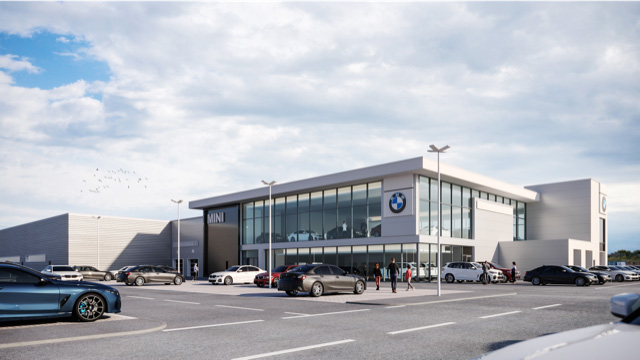 Another 150 Approved Used vehicles will be on show on the forecourt, and there will also be a 28-bay workshop specialising in servicing BMW’s motorsport-inspired M range.

Callum Rankin, Arnold Clark BMW and Mini franchise manager, said: ‘We’ve been delighted to offer a specialist service to our BMW and Mini customers for more than 16 years.

‘Our expert sales employees and technicians have the knowledge and experience to offer advice and service of the highest level.

‘For our existing customers, nothing is changing other than the name above the door.

‘Arnold Clark has worked closely with BMW and Mini for a number of years, and as we enter this new era, we’ll continue to deliver a premium experience.

‘The rebrand will allow us to provide customers with complete transparency and simplicity by better aligning our physical and digital channels.’

Arnold Clark was founded in 1954 and now has 200 branches across the UK.

You can watch our interview with Hawthorne about the firm’s record profits at the top of this story.