The 100 most profitable car dealers in the UK have been revealed – and automotive retail power house Arnold Clark leads the way.

Now in its second year, the Car Dealer Top 100 pitches franchised and independent dealers against each other to give the most insightful picture into the automotive retail landscape in 2020/21.

Topping this year’s table is Arnold Clark which made a £354.2m EBITDA profit on a turnover of £3.8bn.

The Scottish-based dealer group, run by CEO Eddie Hawthorne, increased its EBITDA profit by a whopping £159.9m, or 82 per cent, compared to the year before.

Speaking to Car Dealer, Hawthorne expressed his ‘pride’ at his staff’s hard work during the past 12 months, and said it ‘was a really great performance’.

You must be a registered member of the Car Dealer site to access the full list. You can sign up in seconds with your name and email address and view the list by clicking here.

‘The industry has always been attracted by the vanity of turnover with league tables based on this, but the Top 100, by using EBITDA, works out who’s the best,’ said finance expert Mike Jones, who compiled the Car Dealer Top 100 along with financial advisory firm Interpath.

He added: ‘It’s right to to put both franchised and independents together.

‘The timeframe we’re focussing on is quite interesting as well. We’ve used accounts up to the end of March 2021 so that covers the Covid period, lockdowns and the period of selling remotely, and before the world we are now in of chip shortages, no new cars and absolutely huge increases in used car values.’ 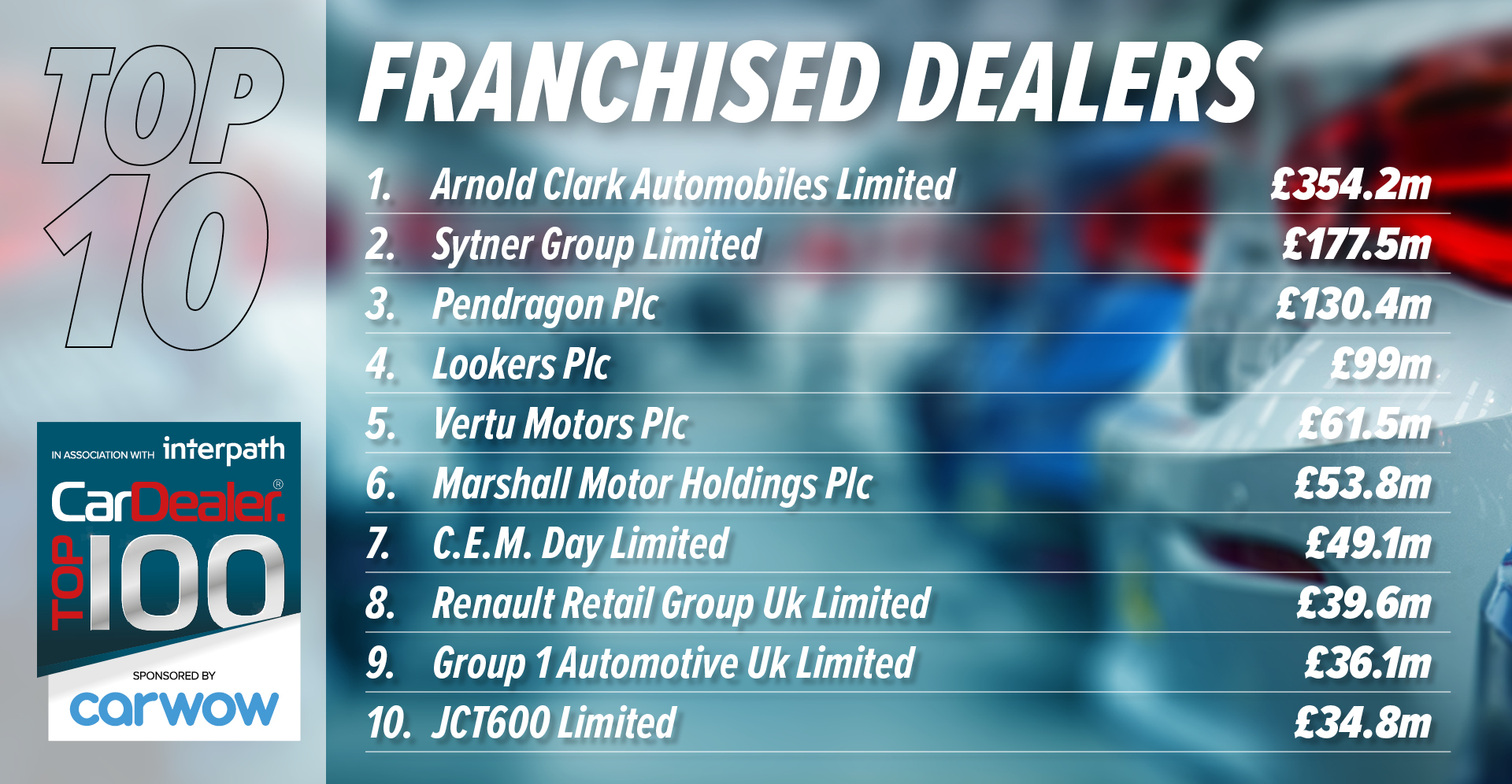 Referring to the performances of the Top 100 dealers, Jones said: ‘Franchised and independents coped phenomenally well through the most challenging business scenarios that I’ve seen in my working life.

‘To effectively see a 41 per cent increase in the average EBITDA of the people making up this year’s list compared to last year’s list, and given the fact that we’ve been through the Covid pandemic is frankly amazing.

‘The average EBITDA of the people in the list is around £16.5m. Everybody had a good Covid period from a profitability point of view, and we also saw the returns on mass increase to 3.3 per cent EBITDA on turnover in this period compared to 2.6 per cent last year. So dealers are making more money while effectively selling less.’

It shows, he said, franchised dealers have had a ‘good year’ while independents ‘effectively maintained their level of performance’ which ‘is a real credit in itself’.

‘They are very, very impressive operators,’ he said. ‘They’ve embraced digital very well and they have some fantastic websites.

‘I’ve been to their office before and it feels like a tech company’s office – it’s got a real buzz to it, and it’s clear a lot of investment has been made into engineering and product teams for the websites.’

Hind added: ‘Arnold Clark has excellent consumer propositions around delivery, and this win doesn’t surprise me – they are serious operators.’

The top independent was Car Giant with a £29m EBITDA profit – a performance which also placed it in eleventh place overall, sandwiched between big franchised dealers JCT600 and Listers Group. 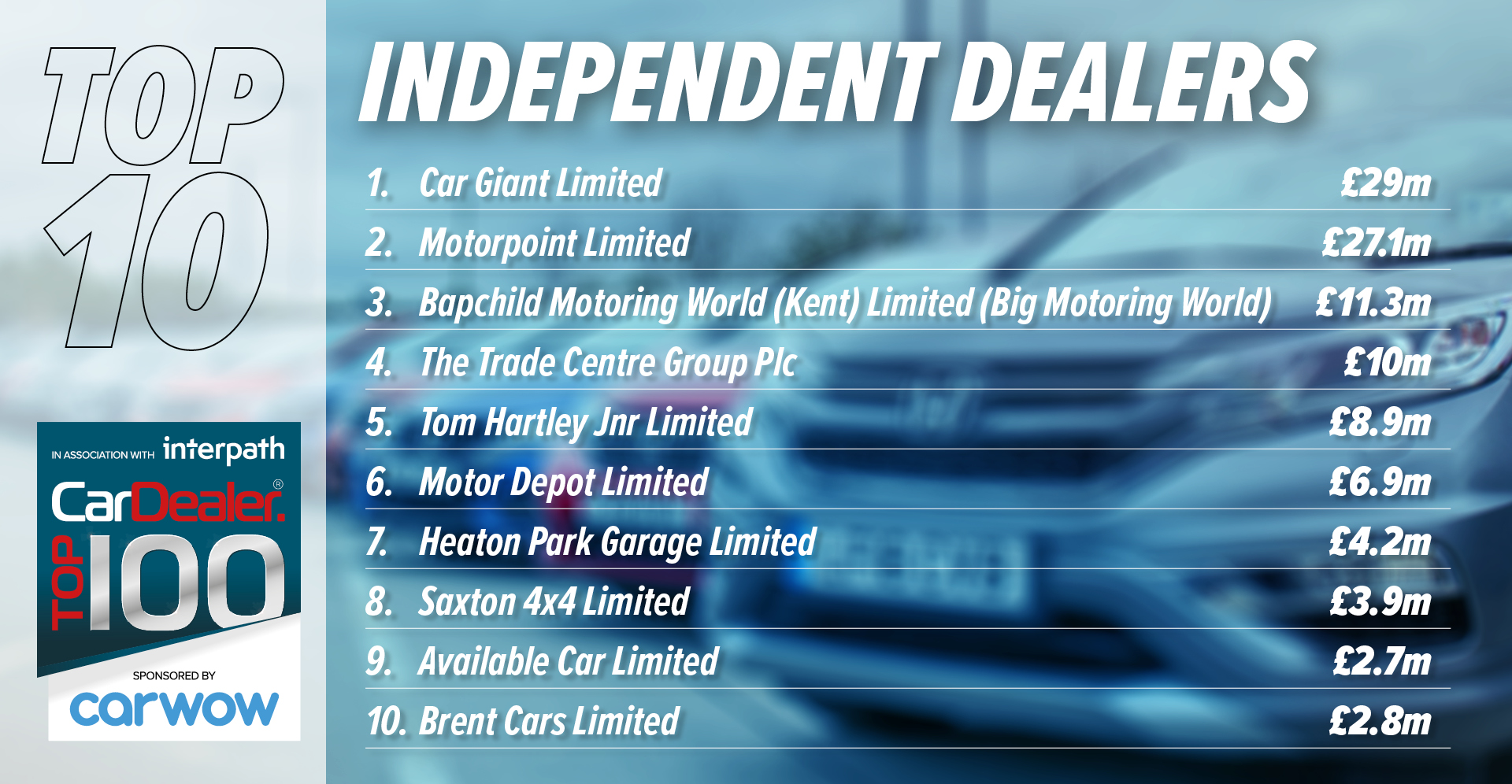 However, by finishing in eleventh place, Car Giant didn’t rank as highly for the independents as Trade Centre Group did last year – that business was ranked in seventh place overall.

Jones commented: ‘The independent performance this year is quite interesting.

‘You’ve got Car Giant and then followed closely behind by Motorpoint – really quite close in an overall performance point of view.’

Jones was impressed by Car Giant’s and other independent dealers’ performances.

He said: ‘Car Giant’s and other independent dealers’ results are really creditable.

‘They didn’t have the service business en masse to help drive the profitability and to keep the cash coming in as we went through the lockdowns.

‘They all had to pivot very quickly into remote transactions with customers. This shows how well they did – still managing to generate significant turnover and significant profits when the doors were basically shut.’

The Car Dealer Top 100 is compiled from filed accounts with Companies House rather than management estimates or predictions.

Some large dealers groups, for example Porsche Retail Group, didn’t meet the deadline and therefore were absent from the league, while others have made their first appearance in the list such as Group 1 Automotive.

Meanwhile, eighth-placed Renault Retail Group sold its flagship London West showroom for £37m in January 2021 and agreed a two-year lease on the site. The sale was essentially responsible for the company’s £39.5m EBITDA profit in the Top 100 list.

‘We always see this sort of variation year on year,’ explained Jones. ‘We do it at this time of year to make sure that we can include as many people as possible.

‘The overall trend in profitability is absolutely representative across the sector.’

Looking ahead to next year’s Top 100 list, Hind said: ‘I think we’ll definitely see another great year, without a doubt.

‘This list has shown there are some fantastic businesses and impressive operators at scale, but also great single or two- and three-site groups – and they’re all doing very well.’

Jones added: ‘I believe the results will go up again next year. We’ve seen numerous profit upgrades from the listed dealer groups as they’ve been closing their accounts, showing how good a year they’re having during the course of 2021.

‘The one thing we might see is the resurgence of the independent dealers reflecting used car profitability, therefore getting back to the balance that we saw last year in the Top 100.’