Home > Supplier Tips > As used cars rocket in value, we ask dealers which cars have been their best performers

As used cars rocket in value, we ask dealers which cars have been their best performers

Sponsored: Motorway sales director James Bush says the current boom in used car sales is likely to continue, helped by the quality of vehicles on its platform

With used car prices continuing to rise as the UK adjusts to even greater freedoms, consumers are cashing in on the chance to get a great deal on their car and upgrade to something even better.

We are selling more stock than ever on Motorway – stock figures were more than 10 per cent higher than the previous month, hitting highs of over 300-plus cars for sale daily, with all numbers steadily growing month on month.

Competition among dealers to secure the best cars has really heated up – in fact, the only car bracket that went on average under CAP in May was the sub-£5k.

While competition is intense on our marketplace, with so much stock available, average prices have stabilised around two to three per cent over CAP.

It’s the top end that has seen the most pressure, with high-end cars from brands such as Porsche, Jaguar, Tesla and Land Rover resulting in bidding wars and end prices going for between six and 17 per cent over CAP.

Last month, we asked some of the dealers on our platform how business had fared since coming out of the third lockdown.

This month, we’ve opened up the floor to even more dealers, asking for their views on whether used cars are really rocketing in value, which stock they’ve bought on Motorway that has performed best, and which cars in general have been their bestsellers.

Here’s what they had to say…

Greg Joyce, CEO of Anchor Cars, said: ‘Used car prices have been rising exponentially, and have gathered even greater pace over the past six weeks.

‘We are being forced to buy stock today at tomorrow’s prices, and are often seeing stock sell for the prices we had anticipated retailing them for.

‘We are able to sit on underperforming or higher priced stock in the knowledge that the market will come up to meet us. Stock is in short supply and high demand.’

Henrik Levinson, general sales manager at LMC of Farnham Ltd, noted that easing of lockdown hadn’t affected the values of the lower tier end of the market.

But he acknowledged that cars which had been a slow sell during lockdown were now in great demand, as were diesel cars – despite the launch of various clean air zones in some cities across the UK.

‘True, the book has gone dramatically up on most profiles of stock we look at, with some interesting exceptions in our area, being the cheaper end of the market and some of our vans.

‘We have also clearly seen the effect of different areas of society emerging from the various lockdowns.

‘Vehicles which have traditionally been popular with our older customers are now flying out the door, whereas two months ago they weren’t. Still, we are pleasantly surprised by the continued strong demand for diesel.’

Doug Browne, sales director at Kallenhard Performance Cars, pointed out that car value fluctuations could also be attributed to other stock that ws being advertised at the same time on the same platform.

He said: ‘We value our cars through Auto Trader and aim to have all stock at “good” or “great” when listed.

‘We have seen these prices gradually increase this year but they are determined by the prices of the other cars of that make and model advertised on the platform.’ 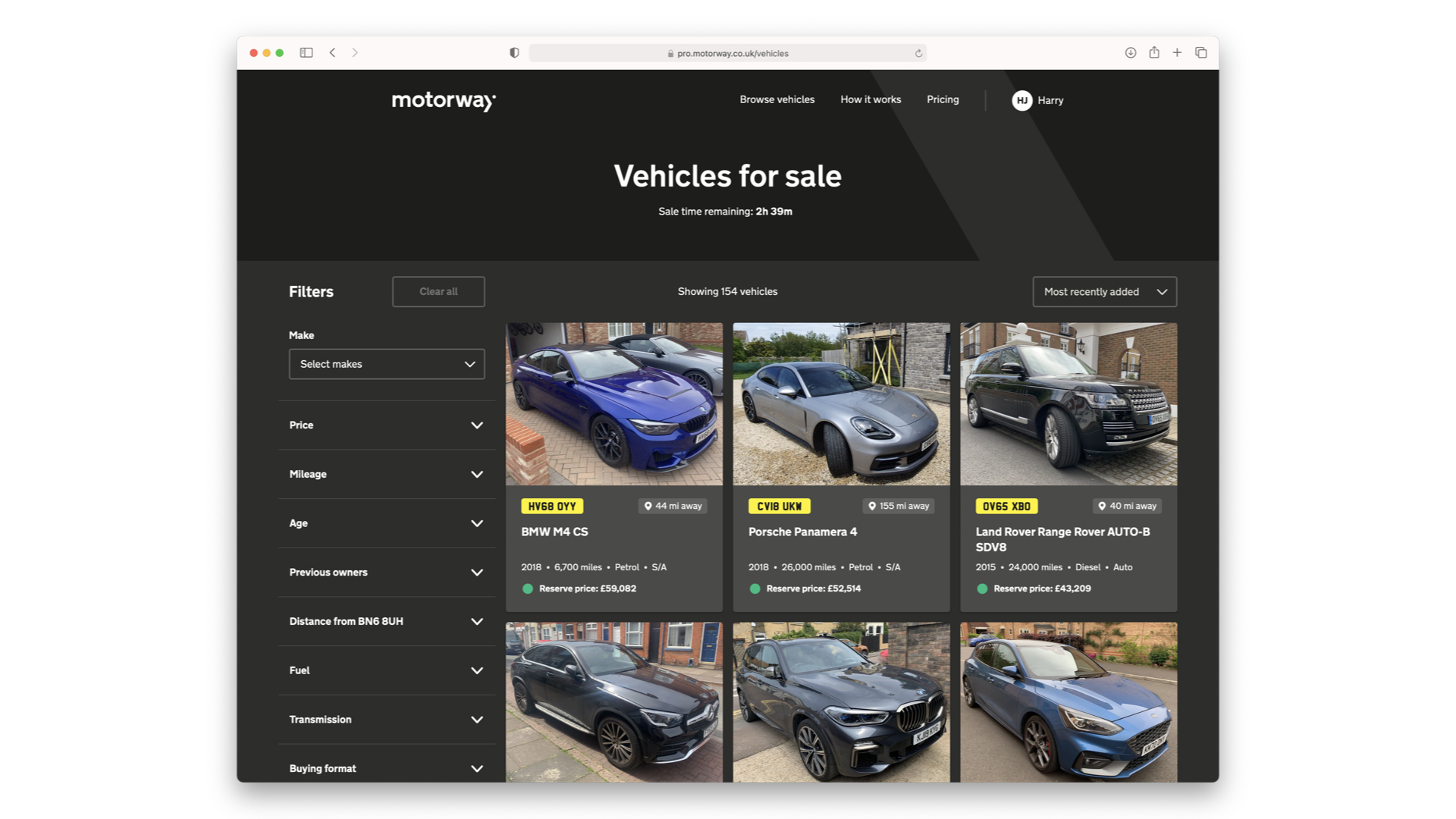 We wanted to gain an insight into what has been the best-performing stock acquired by dealers in the past six months through Motorway.

While Browne thought the whole market seems to be strong from £5,000 cars to £50,000, Levinson was more specific, saying: ‘We have been particularly pleased with the performance of the Citroen, DS, Peugeot, Mazda and Nissan brands acquired through the Motorway platform, particularly Nissan in May.

‘Qashqai, Juke and X-Trail have been phenomenal performers, although with few Brits holidaying abroad this year, coupled with the current chip shortages, you don’t have to be a genius to work out why.’

Joyce noted that it was the quality of the cars on our platform that made the real difference.

‘Motorway has performed best for us, in regards to highly specced stock and performance vehicles.

‘This has most likely been the case as Motorway far exceeds the auction houses when it comes to the quality of the vehicle listing plus the detail of the stock and allows for a far more controlled purchase.’

With the number of new EV sales rising each month, we were keen to get a view from our dealers about how much demand there currently is for used EVs and how these performed against fossil-fuel used cars.

Joyce said: ‘Our best sellers have been in the mid-market range, between £10-25k.

‘The demand for EVs has not yet been significant enough for us to focus on this market, more dabble.

‘That said, the demand is clearly rising month on month. Electric is the future and we are now exploring charging points as well as building out our stock profile to specialise also in this area.’

Levinson agreed, saying: ‘Mid-market has been the best for us and further towards the £12-15k bracket than we would usually sit at. Finance penetration is also increasing as more of our stock can be put on PCP.’

Browne looked at its best sellers across the price tiers, determining that at the lower end, 10-year-old German diesel saloons were doing very well for it.

Meanwhile, in the mid-range it was convertibles and sports cars that were providing the best return, while SUVs such as the BMW X5 and Range Rover Sport were the biggest drivers at the high end.

As we move into July and edge closer to the revised end of restrictions and summer holidays, we are likely to see used car sales continue to boom as we approach the September plate-change month.

Whether people are staycationing or driving abroad to limit prolonged contact with others, they are going to be on the move.

And with more quality stock than ever before, forecourts will be full of people looking for fresh wheels to enjoy the months ahead.

Need more stock for your dealership? Motorway has hundreds of exclusive, privately owned used vehicles to buy every day, sign up to Motorway here.