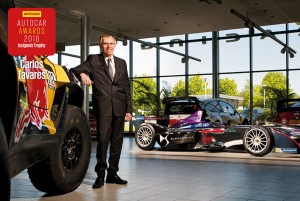 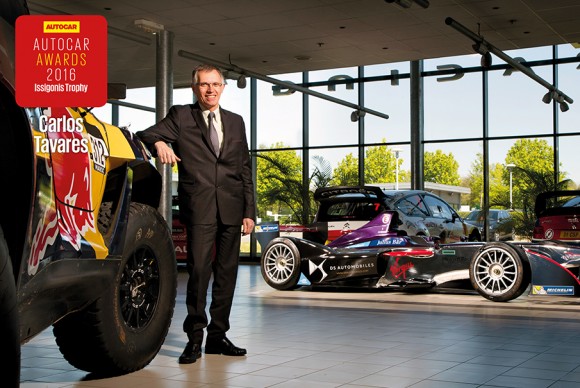 AUTOCAR honoured the best cars and people in the automotive industry at the new Autocar Awards, in a glittering ceremony at the stunning Silverstone Wing after CDX.

Carlos Tavares, chairman of the managing board of the PSA Group, was named the winner of the Issigonis Trophy in recognition of his work in transforming his brands’ ranges of cars.

The second major Autocar Award, the Sturmey Award, was presented to Simon Saunders, the founder and boss of British manufacturer Ariel, for his company’s innovative and determined approach.

Ariel was a multiple winner on the night, with its go-anywhere sports car, the Nomad, being one of six cars to collect an award in recognition for earning a five-star rating in the respected and demanding Autocar road test. The other cars that impressed the expert Autocar road testers and scored five-star ratings were the Ferrari 488 GTB, Ford Focus RS, McLaren 570S, Porsche 911 GT3 RS, and the Porsche Cayman GT4.

On the night the Readers’ Champion was also crowned, with the winner having emerged triumphant in an online poll on the Autocar website. Autocar’s panel of experts named their favourite 50 cars on sale, and then tens of thousands of autocar.co.uk readers voted to choose the overall winner. It was a keenly fought contest, but the Lotus Elise was named as the ultimate winner.

British Porsche driver Nick Tandy was named the Motorsport Hero for his part in his team’s victory in the 2015 Le Mans 24 Hours – the first Le Mans win for Porsche in 18 years. 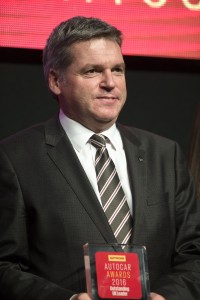 Autocar also shone a light on the successful and booming UK car industry, with three individuals hailed as Autocar’s Outstanding UK Leaders. Mitsubishi UK’s managing director, Lance Bradley, was recognised for his bravery and vision in putting his company at the forefront of the plug-in hybrid car market.

Mercedes-Benz UK’s managing director and CEO Gary Savage won for his work making his company the UK’s fastest growing premium brand, while Tony Whitehorn took home the award for his innovative approach as the president and CEO of Hyundai UK.

The Innovation Award is another new addition for 2016, and the Audi SQ7 was the first to take the prize, winning for its pioneering 48V electric sub-system technology. The Lexus IS was crowned Autocar’s Used Car Hero, for offering a compelling combination of affordability and reliability.

The Mazda MX-5 took home the title of the best ‘real-world’ performance car from Autocar’s annual Handling Day event, while the Ferrari 488 GTB was named the best driver’s car at any price point.

Autocar editor Matt Burt said: ‘The new Autocar Awards celebrate the very best that the automotive industry has to offer, be that the cars on sale today or the people behind them.’

The full list of Autocar Award winners is as follows:

MORE: CDX Brexit debate – should we stay or should we go?

MORE: CDX in pictures – what a day, with more than 2,000 delegates through the doors