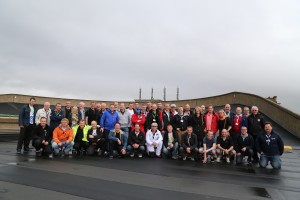 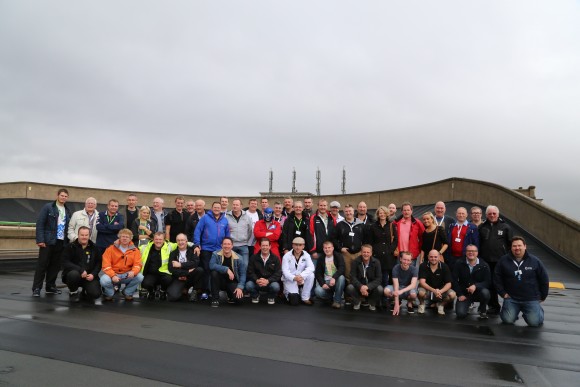 #B4B14 Day Three: We recreate the Italian Job. Sort of

Biblical doesn’t begin to come close to describing the swimming pool car park our Bangers4BEN teams were met with in Como, Italy, this morning.

As we packed our bags into our £750 steeds (soon to be sold in aid of BEN) I’m pretty sure someone had pulled the plug on nearby Lake Como. It was all a little bit moist to say the least.

Severe weather warnings that were likely to delay our journey south to Turin by three hours were in place, but we couldn’t come this far and not make it to our final destination.

The plan was to meet security guard Mr Milato at the old Fiat factory where he’d open a door to let us onto the roof where they filmed the famous scene in the Italian Job.

The BEN team were otherwise engaged in a bent metal saga that had unfolded in the wee small hours of last night, so it was left to me to phone Mr M.

‘Hello, this is James from Car Dealer,’ I said in my best Italian accent.

It was clear he spoke no English. My Italian stretches to ‘carbonara’. The conversation ended pretty quickly. In fact, he probably thought I was trying to help him with his PPI claim.

Still we set off for the factory with some Bangers4BEN hope in our hearts. Our morning was filled with steamy windows (not like that) and us ending the search for The Worst Coffee In Italy. It’s in a services near Lake Como if you’re interested.

Don’t worry! The search is over! I have finally found it: The worst cappuccino in the whole of Italy… #b4b14 pic.twitter.com/smitWxdZgg

When we got to Turin the locals lived up to their driving skills, or lack their of, and treated our Banger rallyists to a series of close shaves, bumper scrapes and paint swapping. Our little MX-5 scampered around the trouble, potholes and slipped around the roundabouts. The Turbo badge makes all the difference. That and our aerodynamic improvements thanks to our window ‘repair’.

We pulled into the old Fiat factory (now a shopping mall) around lunch time where the assembled masses were waiting to hear whether I’d managed to get anything other than Italian out of Mr M. I hadn’t. We lined our car up for a picture outside the factory just in case that’s all we could get.

Meanwhile, some of the teams made sure their arrivals will be remembered forever… Others just left their cars to drip dry in the car park….

Fortunately our Bangers4BEN forward party had used some good old fashioned British charm and managed to tease the keys from the yellow-jacketed, gun toting security guards.

We gathered the troops and headed north. When we finally managed to get on to the special stretch, walked the banked curves at each end and soaked in the atmosphere there was an enormous sense of achievement.

We snapped a few group shots of the teams that made it to Turin and the roof (some saw the weather in the morning and decided to head north instead).

And if I had a pound for the amount of times I heard someone mention doors, blown off and only in the same sentence sentence as we walked around I’d probably have had enough for desert after this whopping pizza.

Today has been mega. Turin, pizza & many miles in our Mazda with a leaky roof. Loved every minute. Thanks #b4b14 pic.twitter.com/6YTjAP2I8C — James Baggott (@CarDealerEd) October 13, 2014

It wasn’t all good news though. While we were enjoying the sights on the roof some Italian low life in the car park was breaking windows on some of our cars. Nothing was taken in the progress, but still it wasn’t a nice way to end the summit of our trip.

As we hit the road back to Mulhouse – our stop for tonight – there were some more incredible roads to enjoy. We soared up to the Great St Bernard Tunnel, which links Martigny with Rhemy-en-Bosses and the ascent into the clouds was stunning.

There *may* have been some queue jumping by some people… erm…

We even managed to coast for 25km down the other side of the mountain – doing our bit for the Swiss. They really do NOT like cars there. Fines for speeding are imposed at just 1kph over the limit… especially in tunnels. And they have lots of tunnels.

We obviously didn’t break any of the speed limits. Not at all. Honestly officer. Meanwhile on the route home there were a few ‘issues’ with the other teams. Blackshaws’ Dog had a run-in with Italian plod. We’re going to break them out of jail tomorrow with three Minis…

There were some interesting sights on the road home for Captain Caralot and his Sun Motors crew too. The Plod they met seemed rather more friendly than Blackshaws’ encounter though…

And even though not everyone made it on to the roof of the factory (like Pinewood who got caught in traffic) they still enjoyed getting to the #b4b14 ultimate destination.

Now all the teams (well almost all as we’re still waiting to hear on a Mercedes with a stricken gearbox) are back safe and sound in Mulhouse and are relaxing before the drive home tomorrow. Tonight we’ll award the best fancy dress, best tweet of the trip and some other gongs which I’ve forgotten about. But if you pop back tomorrow we’ll let you know who won what. For now, here are men, drinking beer, which we plan to do… momentarily.

MORE: WATCH A VIDEO FROM ONE OF THE TEAMS ON THE ROOF