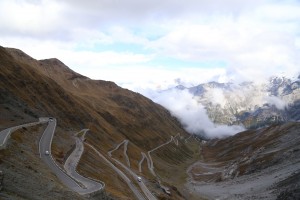 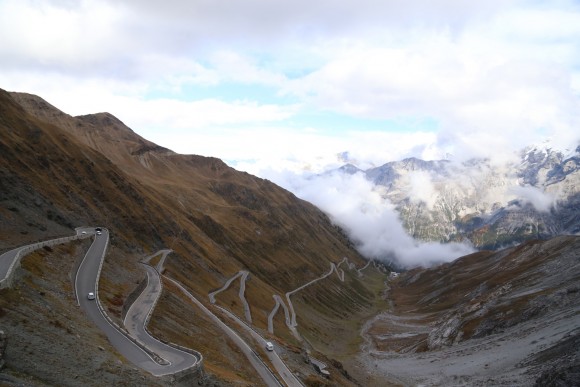 There’s a point in a pan-European Bangers4BEN adventure when a few things are guaranteed to happen.

Tempers will begin to fray, Italians will drive like complete tools, your music choices will run dry and, if you’re really unlucky, your car will give up the ghost.

Today our 40 Bangers4BEN teams headed from Mulhouse, France, through don’t-speed-because-they’ll-shoot-you Switzerland, to Italy via the incredible Stelvio Pass.

Much has been written about this twisting, dipping and diving stretch of asphalt, but until you’ve witnessed it with your own eyes, clothed in a blanket of cloud, sweeping left to right as far as the eye can see it really is impossible to imagine.

It’s the reason we’re all here. A legendary stretch of black top – fabled for it its hairpins, its punishing climbs and hold-on-to-your-stomach runs back down to thick, oxygen rich air.

That is if some of us can unwrap their cars from a cocoon of cling film first. Our poor operations director woke up to this. Who would be so mean do that to him? I mean really…

Our journey was a rather surreal one too.

Either we ate too much cheese at dinner last night (or at breakfast, second breakfast or brunch), or perhaps the Legionnaires Disease we’ve definitely caught from the washer bottle liquid coating our windscreen in gunk is starting to take affect – whatever it is, I’m pretty convinced we got on a train this morning…

That said, this morning was a very long time ago.

We blindly followed the worst TomTom sat nav that I’ve ever had the misfortune of turning on (pictured above having one of its many, many paddies) and it led us to a tunnel that penetrated a massive mountain.

Which mountain that was I can’t tell you, such was our devotion to that annoying woman’s voice hanging off the glass in front of us. To be honest, if I didn’t have this Vine of the train journey I really wouldn’t have believe it happened.

This is what happens when you blindly follow sat nav. You end up on PUBLIC TRANSPORT. How did this happen!?… https://t.co/VUqL84Dit9

It wasn’t just us in there, though. Along with a lot of bemused looking Swiss people (aren’t they always?) and many, many Italians in Alfas, were Danes Autos also experiencing the LSD-like train journey through Mordor.

So instead of driving to stelvio we are about to take a train. Gone wrong!! #b4b14 @CarDealerMag @Bangers4BEN pic.twitter.com/8BlSzL2aVN

Apparently said train saved us a lot of mileage – which, considering I’m now just about ready to murder the next Fiat Panda driver that pulls out on us and drives at 15mph is probably a good thing.

Soon after the weird Chunnel-like experience we were heading towards the clouds, willing our little Mazda up the challenging twists and turns towards Stelvio.

The drive up there was just as much fun as the drive down the other side, dicing with the Fiat X1/9, Thunderbirds Audi 80, Fiat Punto and Aston Barclay’s Skoda Fabia.

At the top of the Stelvio we parked up. Sighed and looked each other in the eyes knowing that making it up here was half the battle.

There were some furrowed brows though…

The Audi had blown its header tank with the pressures of the climb, while the smell of cooked brakes was strong in the air around the other competitors’ cars. To be fair, ours stank pretty bad too.

But we were more concerned about our stomachs…

We gorged on Stelvio Pass pizza (well, it would have been rude not to) and salty fries before descending down the fabled road.

The route was as good as the hype – at least it was until two camper vans ruined our fun with their 5mph negotiations.

You drive 750 miles to drive the Stelvio only to get stuck behind this… #b4b14 pic.twitter.com/t15v3rDDTM

We parked up and let them pass. It was either that or ram them off the road with a digger a la The Mafia. Jon snapped some snaps (like the one below). I took in the views. And then we called it a day – with a quarter tank we thought it best to coast on down and find a fuel stop…

After half an hour of hairpins and some pretty strange decision making from The Worst Sat Nav Ever Made the phone rang. It was our esteemed Bangers4BEN leader who admitted ‘she’d made a mistake’.

We weren’t supposed to drive down the Stelvio after all. Tonight’s hotel is in Como (and don’t for a minute think that means it’s near the Lake where Clooney got married, because it’s not).

That hotel was in the other direction. Brilliant. Cue Jon’s angry face…

We turned around and headed back up the Stelvio…

This gave Jon a chance of experiencing the road from behind the wheel of the Mazda MX-5 Turbo Type R M Power Sport Edition too – and gave me a chance to revisit the aforementioned pizza which on the ‘second sitting’ wasn’t quite as good as the first.

Meanwhile, other teams were hitting problems.

Sun Motors’ Ford Mondeo burst a blood vessel too but those brilliant chaps from The AA managed to step in with a fix.

The fix didn’t last long though. A few miles later this happened…

They weren’t the only ones to encounter problems. Those brake-busting hairpins caused trouble for Marshall’s mighty Lexus on the way down too. We left the duo cooling their brakes at the side of the road as we ploughed on up the hill.

In other news on day two there was something fishy going on down at HPI. And by fishy we mean an ACTUAL FISH inserted in their engine.

Phil Peace found it this morning, but it was so baked on they’ve decided it’s now become part of the patina of their Saab…

There was some fun and games on the way down the Stelvio thanks to the Sportif Group. Their Omega seemed to be performing well chasing the Mazda until it disappeared. We later found out it had ended up in a gravel trap after its brakes gave up…

The Lexus and Omega weren’t the only brake killers in our midst. The guys from Car Finance 247 had a few ‘issues’ on the way down too…

The Stelvio Pass nearly broke the Merc! It was only cooked brakes and overheating @carfinance247 @Bangers4BEN #b4b14 pic.twitter.com/hPfk36ULe2

No one would have experienced any problems with their cars, though, if they’d taken a leaf out of the Blackshaws team’s books.

So sadly missed the main part of the trip due to a little error but this was our fav view of our loner day #b4b14 pic.twitter.com/Q2iTBLCC2E

But judging by they earlier tweet, arriving at the bar mid-afternoon might not have been the wisest move. It looks like The Dog was forced to have its annual bath early thanks to a revisitation of last night’s bar menu…

Was a woof journey for Gareth this morning. Poor car got the outcome and needed a wash and blow dry. #b4b14 pic.twitter.com/c4erpwuDcP

MORE: OUR FAVOURITE TWEETS FROM DAY ONE

MORE: MEET SOME OF THE TEAMS TAKING PART