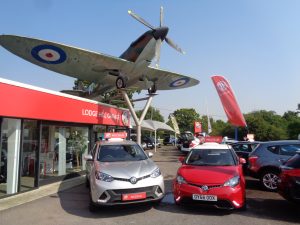 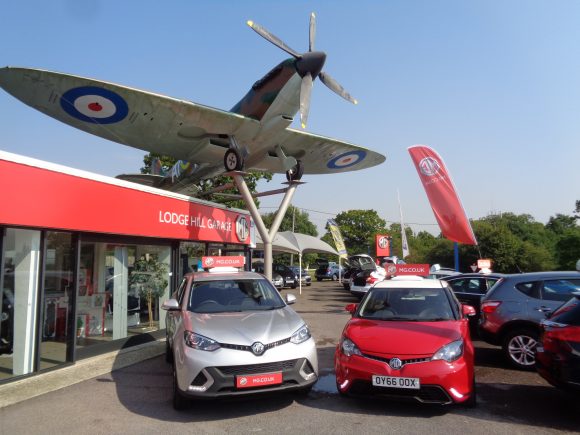 IT’S back to the future for MG – because the manufacturer’s latest dealership has opened in the brand’s historic birthplace.

Lodge Hill Garage in Abingdon is just a stone’s throw away from the site of the original MG factory where cars were built from 1929 to 1980.

The Abingdon dealership joins one of the fastest growing brands in Britain. Lodge Hill’s principal, Nigel Murrin, said: ‘We’ve had a huge response from people wishing us well and saying how glad they are to see the MG name back. It’s just a reminder how much passion there is for the brand.

‘Now we’re planning to repay that with a huge official opening weekend event and we will be confirming the dates very shortly.’

Lodge Hill Garage is on the busy Oxford Road in Abingdon, the main commuter route between Abingdon and Oxford. Drivers can’t fail to miss it – because high on a plinth on the forecourt is a full-size replica of an RAF Spitfire!

Peter Jewson, the co-director of Lodge Hill, installed the fighter as a tribute to the mainly women pilots who formed the Air Transport Auxiliary. They flew the planes from the UK factories, where they were built, to their operational stations.

Jewson is also behind a fund to raise £10,000 to have a permanent memorial to the ATA in the Imperial War Museum.

Lodge Hill Garage was established in 2003, but the addition of the MG franchise has created three new jobs – an MG-trained technician, an apprentice technician and a receptionist. More could follow if the business expands.

Nigel Murrin said: ‘We can’t wait to get started with MG. The brand has a rich heritage, beginning on our doorstep. Both Peter and I have owned, and still own, classic MGs, but it’s the new models that are so impressive.’

Matthew Cheyne, MG’s head of sales and marketing, said: ‘It’s always great to welcome new dealers to our brand, but even more so to now have a dealer representing us in the very birthplace of MG.’

MORE: The categories you can enter in this year’s Used Car Awards

MORE: Steed imports come to a halt because of Euro VI emission rules