Home > News > Back of the net! Peugeot prize makes Ray’s day, thanks to Motorpoint 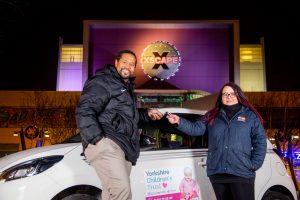 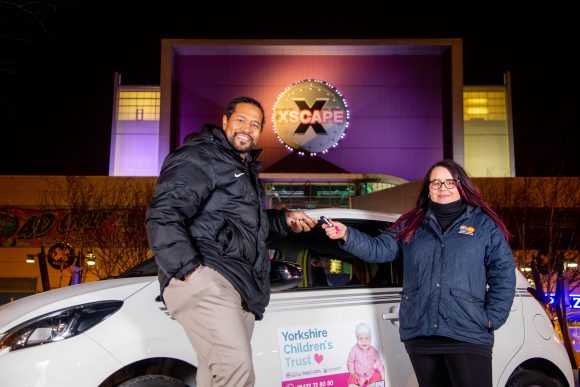 Back of the net! Peugeot prize makes Ray’s day, thanks to Motorpoint

A FORMER professional footballer-turned-teacher is over the moon after winning a car from Motorpoint and Xscape Yorkshire in a charity raffle.

Ex-goalkeeper Ray Francis, who played for Leeds, collected the keys to the Peugeot 108 from the leisure complex in Castleford after entering the competition at the venue just before Christmas.

Francis, who lives in Camberley and now teaches at a sixth-form college, was visiting Xscape Yorkshire with his eight-year-old daughter when he bought some raffle tickets in aid of the Yorkshire Children’s Trust.

‘I was completely dumbfounded when I got the call to say I’d won,’ he said. ‘What a great start to the new year! I plan to name the car after my young daughter Isabella – she was with me when we bought the raffle tickets.

‘I already support a children’s charity which supports families through child bereavement, so when I saw them selling tickets at Xscape Yorkshire for a similar charity I thought I’d do my bit as well, and I am glad I did as I’ve driven away in a new car and the charity has benefited from all the money raised.’

Yorkshire Children’s Trust, which was founded in 2011, has supported more than 1,000 families who have children with a long-term illness or disability. More than £2,000 was raised via the raffle.

Chris Goodison, general manager of Motorpoint Castleford, said: ‘We couldn’t be happier for Ray and we hope he enjoys driving his car from Motorpoint. It’s a real pleasure to have teamed up with Xscape Yorkshire to raise funds for the Yorkshire Children’s Trust, and we hope the money raised can make a real difference across the region.’

The money raised will go towards new counselling services provided by the charity.