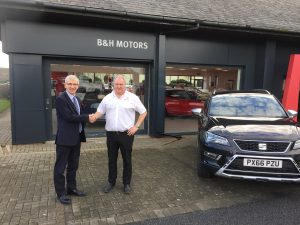 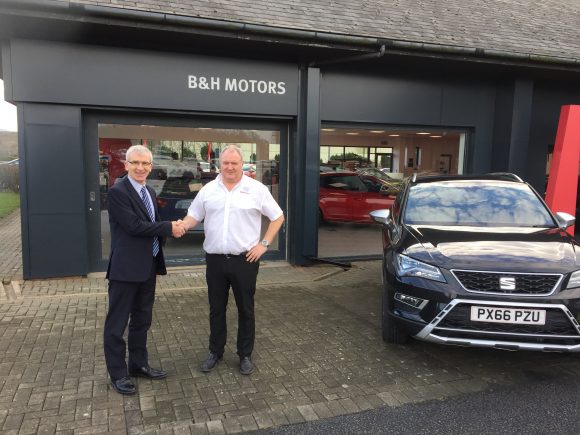 B&H Motors has relocated to new premises in Lillyhall, Workington, after receiving a funding package from Clydesdale Bank.

The Seat dealership, which previously operated out of rented premises in nearby Whitehaven, has been in business for over fifty years and won Seat Dealer of the Year in 2007, 2008 and 2012.

The new site in Lillyhall is three times larger than the previous dealership and will carry three times more used car stock.

It will comprise of a new, modern showroom, a large vehicle workshop with the latest in motor vehicle diagnostic equipment, tyre fitting and MOT testing facilities and a huge pre-owned vehicle display area.

The new site has already allowed for an increase in turnover and profitability, with the opening weekend resulting in record numbers of new vehicles ordered for delivery in March.

B&H Motors has employed a further four people from the local area to support the increased scale, with plans to continue hiring.

Geoff Moore, director of B&H Motors, said: ‘We have been in business for fifty years and banked with Clydesdale for almost the entire period. It is incredibly exciting to see the business expanding, but we have the same family values as before. We have had one bank almost since the very beginning and we value this long-standing relationship and the support Simon and his team provide.’

Simon Campbell, commercial manager at Clydesdale Bank, said: ‘We are delighted to be supporting B&H Motors in the next stage of their growth, as they move to their new premises. The management team have shown great ambition in expanding the business and we look forward to working with them as they continue to grow.’

MORE: Hear vital SMMT insight into how Brexit will affect the motor trade at CDX17

On SuperUnleaded.com: Here’s McLaren’s next supercar on track