DS Automobiles has pulled the covers off its latest new model – the DS 4 hatchback.

Unlike the DS 3 which morphed from a supermini to a crossover, the new DS 4 carries on where the previous model left off and competes against posh hatchbacks and small crossovers.

This time around, DS has given the DS 4 sharper styling and a more luxury interior to give it a better chance in the fight against the BMW 1 Series, Audi A3, Mercedes-Benz A-Class, and small SUVs like the Mercedes-Benz GLA and BMW X2.

DS says it has tried to give the car coupe SUV and hatchback styling cues, and the wheels have been made deliberately large to give better kerb appeal.

The front is dominated by a new light signature, which sees slim projector headlights with Matrix LEDs positioned up front and flanked by daytime running lights made up of two lines of LEDs. At the rear, the lights get a new laser embossed scale effect and scrolling indicators.

The interior features ‘invisible’ vents which clean up the overall look of the interior, while leather, Alcantara, forged carbon and wood are used throughout the area. A new head-up display setup allows key information to be ‘projected’ onto the road ahead via an optical illusion.

A 10-inch infotainment system sits in the middle of the dashboard which can also be controlled via the DS Iris System – a virtual assistant which can ‘listen’ to commands and perform requests accordingly. It works as a conventional touchscreen, too. 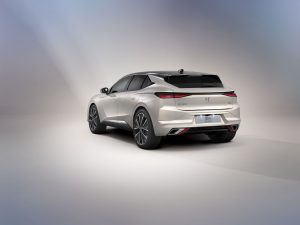 Level 2 semi-autonomous driving technology is also included, as is Active Scan Suspension pinched from the DS 7 Crossback SUV, which looks at the road ahead and can adjust the suspension automatically if it detects any surface imperfections coming up.

The DS 4 will be available with the choice of petrol, diesel and a plug-in hybrid powertrain – with this final setup delivering up to 30 miles of solely electric driving from a single charge.

Three specifications of the DS 4 will be available from launch, the base car is badged DS 4, while the DS 4 Cross gets a more SUV-like look with receives a bumper finished in matt black paint and roof bars. The Cross can also be specified with Advanced Traction Control as an optional extra, bringing extra capability over difficult surfaces.

The DS 4 arrives in the UK in November and pricing will be announced closer to the car’s arrival.

Worst start to a year for new car registrations since 1970 as sales drop by 39.5 per cent in January

Worst start to a year for new car registrations since 1970 as sales drop by 39.5 per cent in January