Car buyers are most likely to be incentivised to buy a new vehicle by zero per cent finance deals, according to a new survey.

Good ‘manufacturer deals’ and a cut in the rate in VAT would also encourage buyers to shell out believes Carwow.

In a survey of 1,971 people on its website, the firm found that 60 per cent of buyers would be most incentivised by zero per cent finance, 43 per cent wanted manufacturer deals and 34 per cent were after a cut in VAT.

Other incentives that would interest buyers included guaranteed part exchanges (23 per cent), a government scrappage scheme (17 per cent) and deferred car payments (eight per cent).

A spokesperson for Carwow told Car Dealer Magazine: ‘It’s interesting to see the possibility of scrappage not coming higher up in terms of buyer awareness and priority.

‘We have seen scrappage act as a powerful incentive to inspire drivers to investigate a move to cleaner, more fuel efficient cars in Germany and Spain, as well as the impact of previous scrappage schemes in the UK.’ 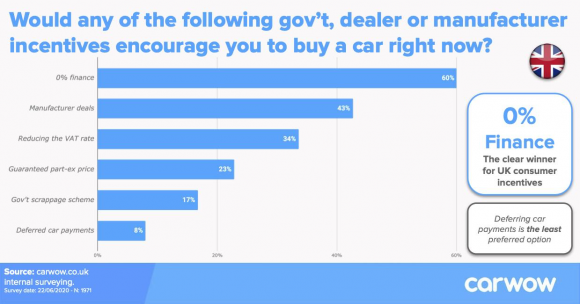 A scrappage scheme in the UK is thought to be unlikely after a government spokesperson said this week that they believed current incentives in place were enough.

The car industry has been lobbying hard for a scrappage scheme to be put in place to help boost demand.

Chancellor Rishi Sunak is due to make an announcement on his plans to boost the economy on Wednesday – many believe a VAT cut is likely.

What car dealers need to prepare for VAT cut

‘While a scrappage scheme has been deemed unlikely, we would like to see the UK follow Spain with a meaningful government support package that offers a tiered reward system that gives the best discounts for going fully electric, but incentivises all efforts to move to newer, more fuel efficient cars,’ said the Carwow spokesperson.

‘Spain and Germany have been pragmatic and forward thinking and we have the opportunity to use what they have learned, particularly after the massive success we have seen in Germany for their scheme limited to electric and hybrid cars where hybrid and EV now accounts for 64 per cent of new car searches.’

Carwow also confirmed that it has seen a steady increase in buyers searching its website during the last month.

The spokesperson added: ‘The motor industry has experienced the green shoots of recovery in June, and there is no doubt that there are buyers in-market for cars.

‘Whether they are browsing or serious purchasers, our on-site research has demonstrated that they are open to being influenced by offers and it is food for thought for how to keep momentum going when the initial influx of pent up demand has died down.’

You can watch our exclusive interview with Hind by clicking the video at the top of this post.