Home > News > CDX16: How the motor trade became ‘unattractive’ to work in 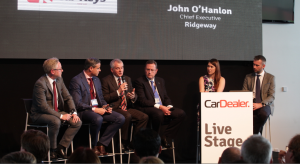 CDX16: How the motor trade became ‘unattractive’ to work in

ONE of the car industry’s biggest challenges is finding the right people for the many roles within a dealership – and the problem was a hot topic of debate at CDX today.

A key event on the CDX live stage was a question and answer session involving four of the UK’s leading car dealer bosses: John Tordoff of JCT600; Nigel McMinn of Lookers; Ken Savage of Perrys and John O’Hanlon of Ridgeway.

As with other events on the stage, it attracted a full house of dealers who broke off from touring the dozens of stands at the expo to hear what the executives had to say.

Asked by James Baggott about attracting and retaining the right people, Tordoff said: ‘I think attracting new talent is one of the key issues the industry faces. Are we doing enough? At local level, yes; at national level, no we’re not.’

Tordoff went on to mention figures discussed at a recent NFDA meeting that showed only a tiny proportion of potential graduate recruits were entering the motor trade. ‘It was a fraction of what it should be,’ he said.

‘I still think, by and large, the motor trade doesn’t have a sexy image. I think most people associate it with fixing and buying cars, but when you think of the variety of careers on offer, such as marketing, HR, IT and so on, there are some fantastic opportunities that we should be attracting great candidates for.’

McMinn added: ‘I agree with a lot of what John said but I do think that as an industry we are getting a lot better as every year goes by. It was unheard of for us to be offering sales apprenticeships several years ago and I don’t think any of us were focused on succession planning or management development with our manufacturer brands.

‘I think as dealer groups, we’re getting better at leveraging the power of the brands. And I think it is an attractive industry to work in. It’s just that we’ve done our best to make it unattractive, with very long hours over six days a week. It’s also very male-dominated and mainly paid through commission.’

He added: ‘Seventy per cent of our intake into sales now are new to the industry – and half are women. That’s very different to the situation five years ago. If we can get it right at ground level, I think we’ll see the leaders of the future being a more balanced mix.’

Savage said: ‘One of the major issues is to recognise that we will have to change if we want to attract the staff of the future.’ He added that dealership managements would have to look at working hours and working environments.

‘I’m not sure what the answer is bearing in mind that our businesses need to operate seven days a week but we need to engage in some PR and tell people the automotive industry can be a great career choice.’

Rounding off the debate, O’Hanlon concluded: ‘I think there are two sides to it. We’ve been trying quite hard to work outside the box.

‘We have held ”talent wanted” evenings and started to go about recruitment slightly differently. We also do a lot of social media advertising, attracting people we wouldn’t normally reach.’

On SuperUnleaded.com: Driver Tries Showing Off A Car Meet, Gets It Slightly Wrong