Home > News > CDX18: Getting the basics right in a tough market is key, says Perrys boss 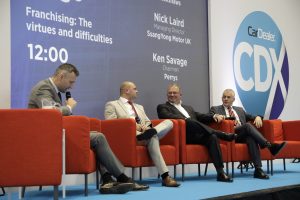 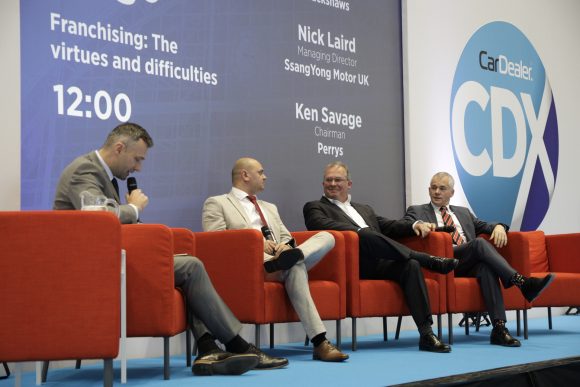 CDX18: Getting the basics right in a tough market is key, says Perrys boss

THE market is tough – and getting the basics right in difficult times is crucial, according to the boss of one of the largest independently owned dealer groups in the UK.

Speaking during a Live Stage discussion session at CDX18 in Manchester, Perrys chairman Ken Savage said: ‘We’re doing all right, but we’re working very, very hard and it feels as though we’re standing still. Comparing ourselves to last year, which wasn’t a great year, we’re there or thereabouts.

‘Things even seem to have got quieter over the last couple of weeks – maybe it’s because of the weather. You’ve just got to dig in, do what you do, make sure you’re doing the basics right and carry on.

‘You can have a few weeks or even months that are quite challenging, and then all of a sudden it’ll turn. There are no easy answers but we have all been here before. It’s certainly the most difficult time I have known in the industry but our business is in a good place so we’ll look forward to a better trading environment in times to come.’

Asked what was making things so tricky at the moment, Savage replied: ‘I think Brexit is the dark cloud at the moment and it’s causing a real issue in terms of the impact on exchange rates. That means manufacturers don’t have the margin that they perhaps had in the past – and that is putting the squeeze on dealers.

‘We could really do with some vision in terms of what’s going to happen with Brexit. Until we’ve got that, I think it’s going to be a difficult time for the economy.’

Joining Savage for a discussion about the role of the franchised dealer on the Live Stage were Will Blackshaw of Northumberland dealership Blackshaws and Nick Laird, the UK managing director of South Korean car manufacturer SsangYong.

Asked if he would recommend franchised car sales to any dealer, Laird said: ‘No, not to any dealer. I think you have to go into it with a mindset of wanting to build something for the future and be prepared to change as part of that process.

‘You have to think about it carefully before you do it. Different manufacturers and different franchises have a different approach to how they want to interact with their dealers – so therefore I think you have to pick one that suits you.

‘We try to be at the lower-cost, easier-to-do-business-with end, but many manufacturers – and many of the higher-volume ones – are much more prescriptive.’

Blackshaw, who currently works with Nissan, Mitsubishi and Suzuki, said he was a big fan of being a franchised dealer.

‘Personally, I love it,’ he said. ‘Recently, the Mitsubishi Eclipse Cross was featured on television. Over the next few days, we had a continuous footfall of people coming through. Personally, we didn’t spend any money on that marketing – obviously it’s in the margins of the cars – but it’s good to have a joint goal.’

CDX18: In pictures – the massive expo that took over Manchester Central

CDX18: Day two of CDX is in full swing, and again, it’s taking Twitter by storm!