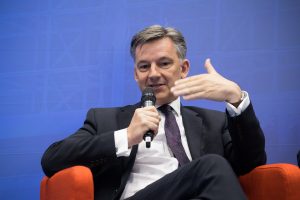 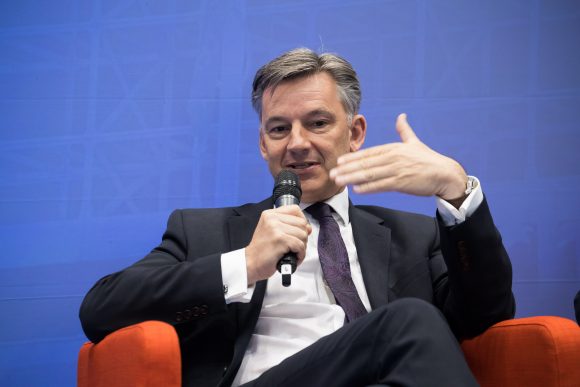 A LACK of consumer confidence in diesel means emission levels are rising in the UK, according to the boss of the motor industry’s trade body.

Speaking in Manchester yesterday at CDX, Society of Motor Manufacturers and Traders chief executive Mike Hawes said: ‘What we saw last year was that average fleet CO2 for the UK went up by 0.8 per cent, and that’s the first time that CO2 levels have risen since [the SMMT] started recording.’

He cited as reasons a drop in diesel sales and the adoption of larger, more-polluting crossovers and SUVs – one for which the increasing sale of alternatively fuelled vehicles couldn’t yet compensate.

New tax rates on diesel cars that came into effect in April penalise people looking to buy more emission-efficient vehicles, while the industry has also been affected by the wider dieselgate scandal.

Hawes, pictured, who was taking part in an expert panel session on the future of the automotive industry, also spoke out about other issues affecting the UK car market, including Brexit and the introduction of alternatively fuelled vehicles.

He said Britain’s car industry had to ensure there was ‘strength and stability’ – particularly after the UK leaves the EU.

‘We have huge issues to face – and they’re all happening simultaneously,’ said Hawes. ‘You need to keep pace with the change, and you need to make sure that you’re leading those changes,’ he told dealers attending the two-day event.

Hawes backed the UK’s ability to successfully adopt alternatively fuelled vehicles, but said many challenges were still to be overcome to get consumers on board with the new technology.

‘The industry can put these cars on the market, but whether they actually get sold and bought by consumers depends on a variety of factors – not least availability of infrastructure and affordability, as these are still expensive technologies.’