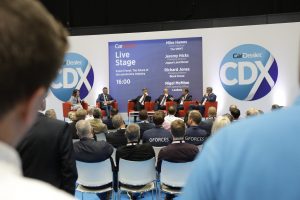 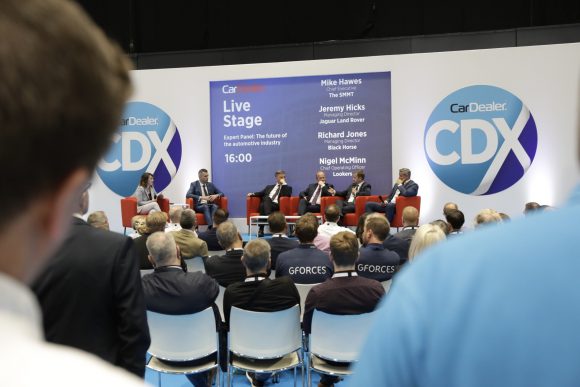 The uncertainty largely revolves around the issues of emissions and taxation, Hicks told an audience at CDX18 at Manchester Central yesterday.

Taking part in a discussion on the future of the automotive industry on the Live Stage, he said: ‘There needs to be clarity.

‘In the market, there is so much confusion now and it has been created by the government. It has left consumers wondering whether it is even okay to buy a vehicle with an internal combustion engine any more. That has caused an untold amount of hold-off.’

Hicks explained that as a manufacturer, JLR was heavily dependent on diesel and added: ‘It’s in my interests to understand what’s going on.

‘Half of the consumers we asked didn’t even know what EU emissions standards are. A number of them think EU6 is a lower standard than EU1. And a third of consumers don’t know the difference in impact between diesel and petrol engines from a CO2 point of view.

‘And then you’ve got taxation policy. The government has an unclear policy which is basically saying, just don’t go out and buy a diesel vehicle.’

Hicks added: ‘From our point of view, we have been very public with the government. We are saying: Make it clear. Be really, really clear about what you mean.

‘It doesn’t do any of us who are involved in the industry any good to have confusion. We are now on the road to zero – 2040 – when there will be no more internal combustion-engined cars.

‘That’s fine but last year, cars without internal combustion engines represented only two per cent of the market.

‘ We’ve got a long way to go to get to that position where we have no more internal combustion engines. If we could get some clarity back, that would provide a high degree of stimulation into the marketplace.’

Another panel member, Richard Jones, MD of Black Horse, the UK’s leading provider of motor finance, said: ‘The best way to make progress on the government’s air quality agenda is firstly to make it not just about cars – cars are actually a minority contributor to emissions in the UK.

‘The second thing I’d do is get old cars off the road and provide a clear set of guidelines for consumers. You can go into the new ultra-low emission zone in London driving your four-and-a-half-litre diesel-powered car as long as it’s Euro 6.

‘How many people would have thought you could take a four-litre diesel car into that zone and not get charged? That’s down to Transport for London, not the government, incidentally.’

Jones added: ‘With some of the facts out there we do have some real sanity but no-one is grouping it together for consumers and saying, look, for most of you, an electric vehicle is three or four buying cycles away.’

Consumers need to be persuaded to ditch Euro 3 or Euro 4 cars, buy more modern vehicles, and be encouraged to understand the role they have to play in improving air quality in the UK, he added.

MORE: Interviewing potential new recruits should be like a first date