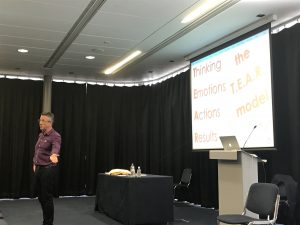 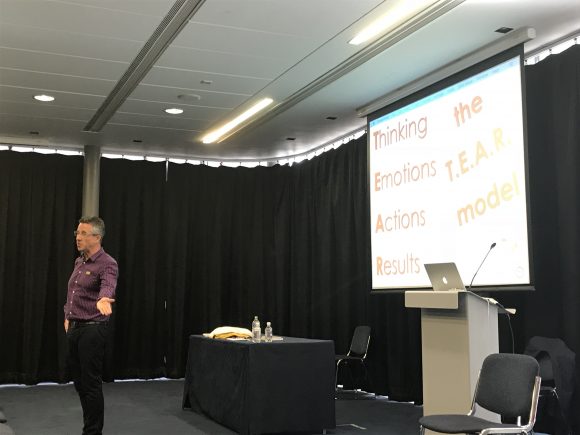 Paul McGee gave an inspiring talk at CDX on how people can improve the way they think.

McGee, who has pioneered the Shut Up Move On (SUMO) philosophy, gave a wide-ranging speech covering subjects such as positive thinking, general mind-sets and how to make a difference each and every day.

‘Today, we’ll press pause for a second and think about how we think,’ said McGee, asking the audience to re-evaluate the way they process different situations and explaining how an improved mentality cannot just help the way they sell cars, but can assist in their personal lives, too.

McGee also spoke of the benefits of ‘beachball thinking’ – which asks people to look at a situation from a different perspective, rather than from a narrow personal one.

McGee also spoke of how just one piece of reassurance to a colleague or employee can make the world of difference in terms of self-esteem. He said it was a good idea to make sure  made sure that each person in the room knew that they were completely M.A.D – Making A Difference.

Members of the audience were questioned whether their internal critic – or imaginary boxing glove – was making a negative impact on their decisions, with McGee professing that ‘stress makes you stupid’, and how avoiding this is crucial to making clear, well-informed decisions – both in business and in one’s personal life.

Keeping problems in perspective was another issue raised by McGee. Audience members were asked to rate their most recent problems on a scale from 0-10 – with 10 representing death.

Interestingly enough, few problems featured highly on the scale, with McGee asking those in the room to take the time to evaluate their business problems and ensure that they aren’t making them into bigger issues than they need to be.

MORE: A video round-up of Day One highlights at Manchester Central

MORE: Interviewing potential recruits should be like a first date

MORE: The key website features that will help you win more business