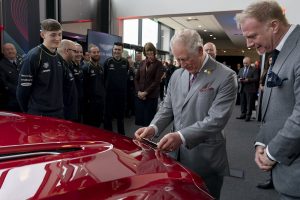 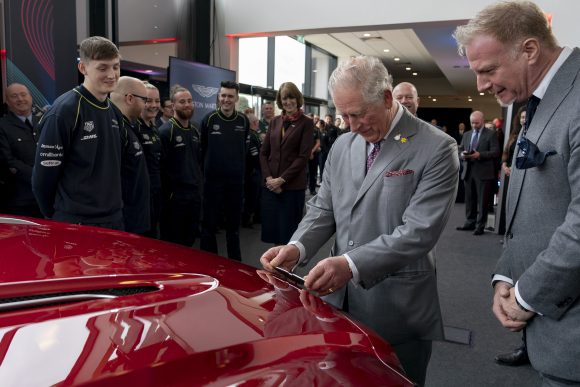 THE Prince of Wales today enjoyed a test-drive in Aston Martin’s new luxury SUV when he visited the carmaker’s factory in St Athan, near Barry.

The heir to the throne arrived at the Aston Martin Lagonda plant in his DB6 Mark 2 Volante, which he purchased in 1970.

The vehicle was converted to run on E85 bioethanol made from by-products of the wine and cheese industries in 2008.

After arriving, Charles got into the driver’s seat of a red DBX – costing from £158,000 – and took it for a 15-minute test drive on the Aston Martin site. 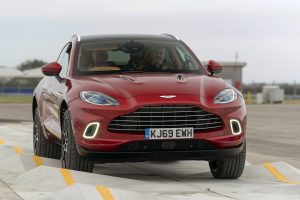 Charles behind the wheel

In a speech to staff, he said: ‘It is a particular pleasure to be able to visit an Aston Martin factory like this having been a very devoted member of the Aston Martin drivers’ club for the last 50 years or more.

‘The wonderful thing was, I was able to drive my very old car here in my very old way and to be able to get in and out of it still – just. What was fascinating was to see this new SUV version, the DBX, and to have had a chance to drive it around.

‘I must say it is a great tribute to all your teamwork and expertise and extraordinary engineering skill which has put this remarkable car together. I am full of admiration for the fact that this is Welsh engineering and skill on a very high level.’

Before making his speech, Charles placed the Aston Martin wings on the front of a brand new DBX.

He joked that it was wonky, telling staff: ‘I knew I’d get it wrong.’

During the visit, the prince met engineers working on different stages of the production process, including seat installation and the paint shop.

Earlier, Charles had visited British Airways’ engineering base in Cardiff where he was given a tour of a Boeing 787-9 Dreamliner plane. He was also due to meet flooding victims on his trip to South Wales.