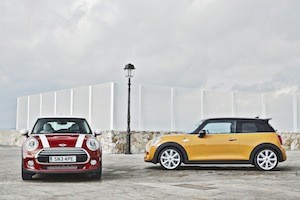 THE next generation Mini has officially been unveiled and according to brand director at BMW Mini, Chris Brownridge, dealers should find them selling like hot cakes.

Due to hit the showrooms in March 2014, Mini customers are already driving the demand to get behind the wheel of a new modern Mini hatch, with dealers starting to take orders this week.

‘Mini drivers have been registering their interest in the new Mini hatch for a few months now and we’re confident that our dealers will have no problem selling them,’ Brownridge told Car Dealer.

‘The next generation Mini is a completely new car. However, by making subtle changes and enhancing original elements of the previous model, it still clearly resembles the Mini brand.’

He added: ‘It features more efficient and more powerful drivetrains and the in-car equipment Mini is offering in this segment is what you’d usually expect to find in luxury premium cars.’

While the German-owned British brand has once again taken its controversial design to a new level, drivers will still have the option to personalise their new Mini as before.

‘We’re moving the game on in this segment but the Mini still offers its customers the ability to customise their car to suit their individual characters,’ Brownridge explained.

‘The hatch’s improved technology and advanced drivetrains mean residual values for the new Mini will remain high in the used car market, which is great news for dealers looking to buy varied stock.’

The Cooper and Cooper D will downsize to more efficient 1.5-litre three-cylinder petrol and diesel engines, while the powerful Cooper S will run a larger 2.0-litre four-cylinder unit, which can produce up to 189bhp.