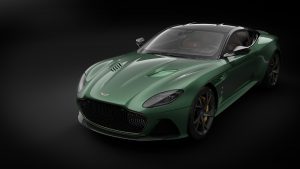 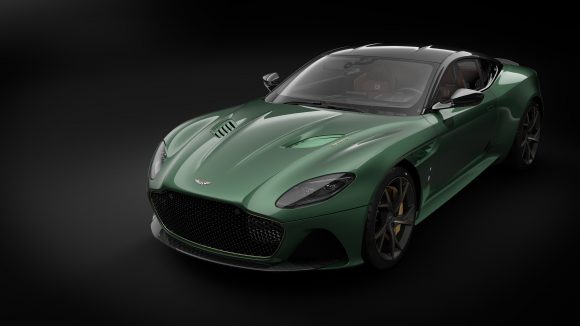 AN ASTON Martin dealership has revealed a limited-edition DBS that pays homage to the iconic vehicle’s legendary 1959 Le Mans triumph.

The DBS 59 was commissioned by Aston Martin Cambridge and built by the manufacturer’s special ‘Q’ division to celebrate the 60th anniversary of the occasion next year.

The 24 Superleggeras feature many interior and exterior design cues from the DBR1, which unexpectedly came 1st and 2nd at Le Mans in 1959 in the historic win for Aston Martin.

Most prominent of the design cues is the paint finish – Aston Martin Racing Green, which featured on the DBR1. Bronze detailing to the exterior and outside also appears – replicated from the brass switchgear on the 1959 car. The grille surround, wheel faces, brake callipers and DBS badges are all finished in gold, too, as a nod to the car’s ‘grandfather’.

Aston Martin Racing Green details also extend to the interior, while the leather headlining has been created from a painting commissioned of the DBR1s on track in 1959. The lucky owners will also get a print of this picture. Subtle DBR1 images, logos and door plaques are placed around the car as well.

Unsurprisingly, this level of bespoke production comes at a price, with the DBS 59 costing £325,000 – substantially more than the standard DBS Superleggera’s £228,000 tag. Ten of the 24 examples had been sold ahead of the car’s unveiling, with all of them expected to be accounted for by the end of the week.

For that price, though, the owners get an unforgettable handover experience. The dealership has organised for all 24 cars to be given to their owners at Le Mans next June, with the super-GTs in the same formation as the 1959 Le Mans grid. The owners will enjoy a VIP experience and have the opportunity to do a parade lap two hours ahead of the start of the famous 24-hour race.

The DBS Superleggera is Aston Martin’s flagship model, which only went on sale earlier this year. It boasts an impressive 5.2-litre V12 producing 715bhp, and is capable of a 0-60mph time of 3.2 seconds.

This isn’t the first time Aston Martin Cambridge has commissioned special models. Three previous projects have been organised by the dealership – the most notable being 10 Red Arrows-themed cars last year, one of which was raffled for the RAF Benevolent Fund, raising more than £1.5m.

Simon Lane, dealer principal at Aston Martin Cambridge, said: “The 1959 Le Mans race is a really big iconic story for the Aston Martin brand, so I’m really proud that on the back of the previous projects we’ve delivered the factory has entrusted us to be the main celebration for this anniversary.”

Just five DBR1s were made – three of which competed in the 1959 Le Mans race. It’s also the most expensive British car to be sold at auction, with the 1959 Le Mans-winning example going for $22.5m (circa £17.3m) at an RM Sotheby’s auction last year.