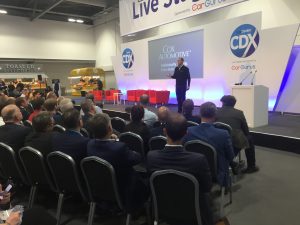 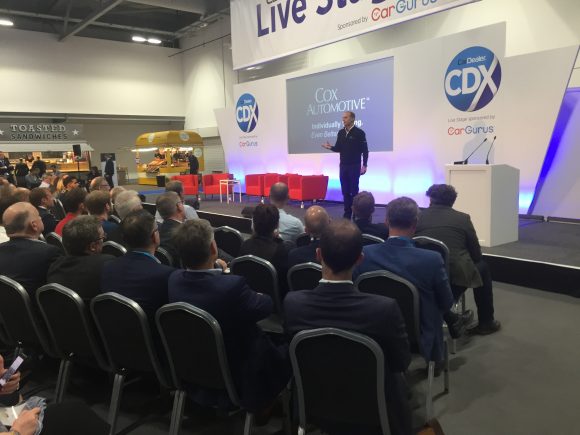 COX Automotive released its Insight Report at CDX 2019, revealing shocking figures for the years ahead.

Chief executive Martin Forbes, pictured at the event, announced some of the headline figures in advance of the release in his keynote presentation this afternoon at Car Dealer Magazine’s motor trade show at Farnborough International Exhibition & Conference Centre.

Used car transactions are forecast to decline by two per cent year-on-year in 2019 to reach 7.795 million, while 60 per cent of dealers believe they will see the number of dealer outlets reduce by 10 per cent or more in the next five years.

However, the report – produced with Grant Thornton using previously unpublished data and analysis to identify emerging retail, wholesale and consumer trends in the automotive industry – also says that while just one in five dealers have a full online sales transaction option right now, 60 per cent say they will have one in the next two years.

The Insight Report can be downloaded in full here.

In the report, Philip Nothard, customer insight and strategy director at Cox Automotive, says: ‘The role of the dealer is still crucial, but we know that consumers want to interact with the automotive retailer in a variety of ways – notably via a range of digital platforms.

‘Our analysis clearly shows it’s not just a case of replicating the retail experience via the internet. Those dealers that are leading the retail evolution are embracing technology to improve the customer experience and bring more flexibility into the car-buying process.’

Cox Automotive has achieved great accuracy with its used car transaction forecasts to date. The business published its first forecast in August 2018, which proved to be within one per cent of the final figure reported by the SMMT. This was followed by a prediction of used car transactions for the first quarter of 2019 that was correct to within 1,000 cars.