In this issue we put the new Nissan Juke through its paces, investigate the stranger-than-fiction details of Carlos Ghosn’s escape from Japan, and ask what the new and used car markets look like in 2020. 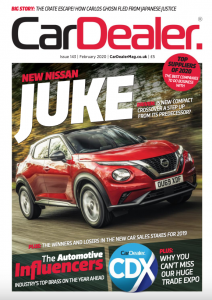 During these difficult times, we think that it’s more important than ever to keep you up to date on the latest industry news – even if you’re temporarily away from the desk on which Car Dealer Magazine would normally land.

With that in mind, for the next three months we’ll be publishing the magazine totally online – and for free!

You’ll find it on online magazine platform Issuu, and indeed embedded on the Car Dealer website itself (as you’ll see above).

Want to read on your mobile device? It’s also viewable in the Issuu app, both for iOS and Android.

Want to make sure you’re kept informed about new magazines being published? Subscribe to our email newsletter, and you’ll be contacted as soon as each issue is released.