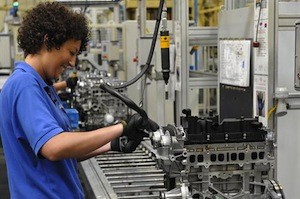 Engine production continued to rise in 2013

The rise also recorded the largest total of engine production for the first time since 2008.

This growth was supported by a nine per cent increase in the output in the domestic market, despite a fall in exports by 1.7 per cent.

Although December recorded a slight dip, engine output actually rose by 3.6 per cent in the final quarter of 2013.

In contrast, the production of commercial vehicles in the UK fell by 21.7 per cent to 87,671 units, due to weak demand and difficult economic conditions in Europe.

The SMMT predicts that output will remain relatively low for the first few months of 2014.

‘With early signs of recovery on the continent and better performance in the truck and bus sectors, there are reasons to be positive, but we expect overall volumes to remain subdued for some months yet.’