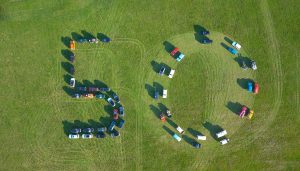 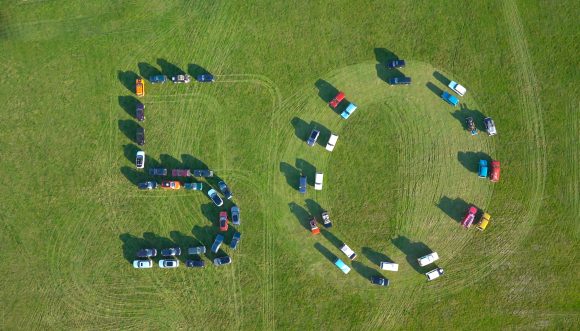 Fifty years of Range Rover have been marked with a driving parade at Goodwood Speedweek.

All four generations of the iconic vehicle were included in the display, which saw the 4x4s drive around the circuit before converging on the grass to create the number ‘50’, visible from the sky.

It included standard models as well as uniquely modified versions such as fire engines, expedition vehicles and ambulances.

Rawdon Glover, Jaguar Land Rover UK’s managing director, said: ‘It has been a pleasure to remind ourselves not only of some of the extraordinary forms that the Range Rover has taken over the years, but also the people and stories behind them.

‘Of course, the gathering was aptly marked by the debut of the new Range Rover Fifty limited edition, which epitomises the design, luxury and capability Range Rover stands for today.’

He added: ‘I would personally like to express my thanks to the owners and collectors who contributed to the event, helping us celebrate this significant milestone in Range Rover’s heritage.’

Among the notable Range Rovers there were the Beaver Bullet, which broke 27 speed records in 1985, plus a Trans-American Expedition model that crossed the Darien Gap in 1971.

Goodwood Speedweek is being hosted at the historic West Sussex motor circuit.

The event is behind closed doors but is being streamed online, with aspects of the Festival of Speed, Revival and Members’ Meeting events combined after they were all cancelled because of Covid-19 restrictions.