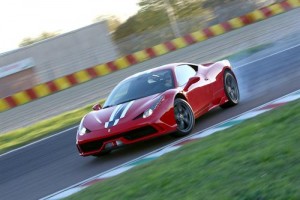 The Ferrari test drive that went horribly – and expensively – wrong

IT’S a car salesperson’s worst nightmare – a customer crashing a car on a test drive.

But spare a thought for the salesman who was sitting shotgun in a brand-new £208,000 Ferrari 458 Speciale that ended up crashing and closing a major road.

According to The Mirror, the accident happened as the customer was making his way along the A12 in Essex. The Ferrari was spotted overtaking traffic in the outside lane between Dedham and Langham.

It’s believed that not long after, the supercar spun into a Volkswagen Bora before piling into the central reservation.

The customer was test-driving the car with a view to buying it but it is unknown whether the incident made him think better of his potential purchase. Little else is known about the driver, but fortunately nobody was hurt in the accident.

Essex Police has stated that no arrests were made in connection with the incident.

Eyewitness Michael Carpenter told The Mirror: ‘I was driving down the A12 on Saturday when I got stuck in traffic, I saw the police move a VW Bora on to the hard shoulder.

‘It was then I saw the Ferrari with damage to the front and rear corners.

‘When I drove past, the salesman from the dealership was on the phone and the driver was looking very sheepish.’

The 458 is thought to belong to Colchester-based Lancaster Ferrari, but when approached by Car Dealer the dealership was ‘unable to comment’.