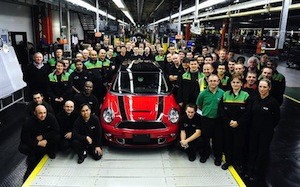 THE very last model of the current Mini hatch has driven off the production line at Plant Oxford.

Leading up to the big launch in Spring 2014, production of the all-new Mini hatch is already underway at the historic site in Oxfordshire.

Although it clearly resembles its predecessor, the new Mini hatch is a completely new car from the ground up, featuring significant improvements in technology, engine efficiency and power delivery and personalisation.

According to the brand director, Chris Brownridge, dealers should find the next generation Mini selling like hot cakes, as Mini customers begin to drive demand with an influx of orders.