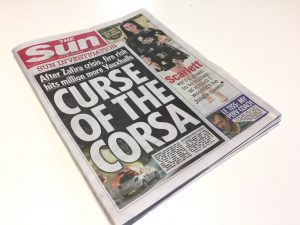 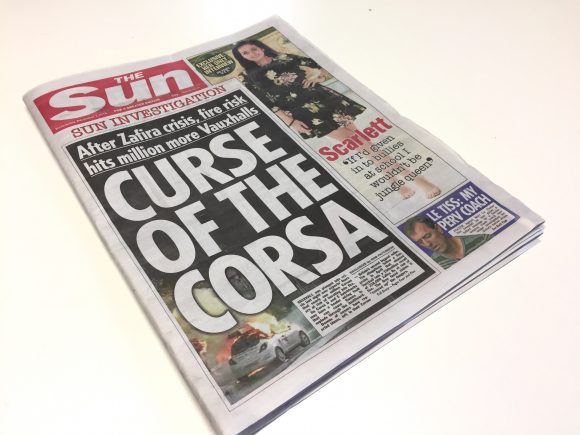 VAUXHALL faced more damaging accusations over the safety of its vehicles today as the Sun newspaper published the results of an investigation into fires breaking out in Corsas.

According to the paper, analysis of a burnt-out Corsa D, a model introduced in 2006, found the fire had broken out ‘in the region of the heater system’.

An expert told the newspaper that heating problems that affected wiring in some Vauxhall Zafira models had also been detected in the Corsa’s heating and ventilation components.

The investigator said the Corsa model also appeared to have similar heater components to the Hummer H3, a 4×4 manufactured by parent company General Motors (GM) that suffered similar issues.

The Zafira B and the H3 were subject to recalls in the UK and the US after a series of vehicle fires were blamed on faulty wiring in the heating systems.

A Vauxhall spokesman said: ‘Vauxhall confirms that there is a different vehicle heating and ventilation system configuration in Corsa D/E to the Hummer H3, inclusive of a different connector.

‘This is why the risk assessment applied to the Hummer H3 cannot be applied to Corsa D/E.

‘Vauxhall has no confirmed reports of vehicle fires originating in the vehicle heating and ventilation system of the Vauxhall Corsa D/E.’

In a report, lead engineer Philip Hoyes said ‘resistive heating’ associated with failure in the Zafira B ‘has also been identified in the heater wiring harnesses of Vauxhall Corsa D models’.

‘A fire-damaged Corsa D, with a history of wiring harness damage, was examined to reveal an origin of fire in the region of the heater system,’ the report also said.

‘The wiring harness and the failure mode identified in Corsa D models appears similar to those of … Hummer H3 where a risk of fire led to recalls in 2015.

‘I recommend that Vauxhall consider that the resistive heating that affected the Hummer vehicles produced by its parent company General Motors is also occurring in its UK Corsa model.’

According to campaigners, more than 300 Zafiras have caught fire in recent years, leaving their occupants with just a few seconds to escape.

In May it was announced that more than 234,000 were to be recalled for a second time to improve the electrical components in the heating and ventilation system.

It followed action last year by GM to recall nearly 200,000 H3s in the US over concerns of fire breaking out in a similar area of the car.

Iain Stewart, a Tory MP who sits on the Commons transport committee, said Vauxhall should either immediately arrange for a recall and fix of affected cars or ‘be upfront and demonstrate beyond doubt why there are no grounds for concern’.

He added: ‘I shall be discussing these allegations with my colleagues on the committee and we may decide to reopen our inquiry into this matter.’

MORE: Former Caralot boss Jamie Caple speaks out about the collapse of dealership

On SuperUnleaded.com: Pop-up headlights just got even better