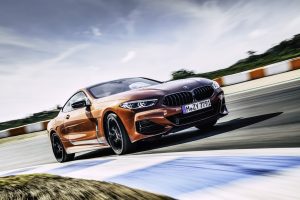 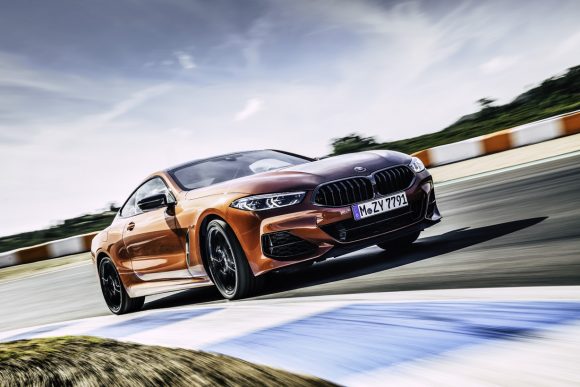 The contemporary 8 Series isn’t quite as instantly iconic or quirky as the original but it’s an important step for BMW – a car that can challenge ultra-luxury offerings such as the Mercedes S-Class Coupe but in true BMW  fashion, by placing driving dynamics and passenger enjoyment rather than comfort at  the top of the list of priorities.

The 8 Series is an all-new car. Initially, it’s exclusively available as a two-door coupe, but BMW will also introduce convertible and four-door Gran Coupe variants. All will share the same trio of engines, too.

It occupies a new market sector for BMW as well, sitting between truly focused sports cars such as the Porsche 911 and genuine luxury models such as the S-Class Coupe. Forthcoming four-door models will also rival the Porsche Panamera.

Although there will be a 40d diesel model available, we drove the M850i – a step down from a full-fat M car but still packing a 4.4-litre V8 with 523bhp. It’s paired with an eight-speed torque converter automatic gearbox, and the combination is simply brilliant.

BMW’s sporting heritage is clear to note as soon as you begin to press on.

The 8 Series isn’t a darty, quick sports car like a Porsche 911, but the fluidity of its handling, the ease with which it grips in fast corners and the way it simply gobbles up a twisting road mean  it’s incredibly satisfying to drive.

Two aspects help it in the corners – four-wheel drive and four-wheel steering. The former is BMW’s well-known xDrive system, which in the 8 Series is rear-biased for greater poise but can push all the power to the front wheels if necessary.

The latter works as most systems do, turning the rear wheels in the opposite direction for faster and tighter cornering at slow speeds, or in the same direction for greater motorway stability.

A few styling details don’t sit too happily on this frame, though – the traditional ‘kidney’ grilles look a little too stylised and don’t play totally naturally with the super-slim LED headlights, while the rear’s complex interplay of surfacing, shutlines and aerodynamic controls is  a little messy from some angles.

Yet the overall shape and a few features such as the double-bubble roof are just wonderful. It’s worth mentioning the car is extremely spec-dependent, too.

The vehicles we drove were all covered in black detailing on the window line and front grille as well as having black alloys. Models that feature chrome detailing look totally different – less sporting and a little classier.

Inside, it’s classic BMW – which is a good and a bad thing. The driver-focused cabin is simplicity itself to use – all the controls are well situated and the iDrive infotainment system is one of the best in the business.

There are some intricate touches just for the 8 Series as well, such as a crystal gear knob and infotainment selector. The driving position is also perfect, and infinitely adjustable. If we’re being critical, though, there’s little of the ‘wow’ factor that you get with some rivals.

This cabin would be equally at home in a 5 or even 3 Series, and we’d quite like a little more than just a shiny gear selector to mark it out as the brand’s flagship.
In practicality terms, a big coupe has never been the most spacious of things – but we’d have liked a little more legroom in the rear.

Auto Express said the 8 Series ‘manages to occupy a previously unfilled niche between being a GT and a sports coupe’. Top Gear said: ‘It’s very competent across the board, but not greatly different from the rest of the BMW range.’

The 8 Series is a seriously impressive coupe and shows that BMW’s ability to blend the luxurious with the sporting is still alive and well.

It doesn’t feel quite as special as some rivals, however – a Porsche 911 is still far better to drive, while a Mercedes S-Class Coupe trumps it on luxury.

So the appeal of the 8 Series  will depend on whether you see  it combining the best of  both worlds or occupying  an uncomfortable middle  ground. We’re leaning  towards the former.