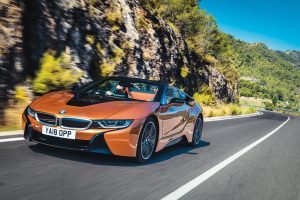 After years of teasers, reveals and promises, we’re finally behind the wheel of the BMW i8 Roadster. A soft-top version of the iconic hybrid sports car, the Roadster is aimed at those who want the wind in their hair when piloting one of the most futuristic-looking vehicles available. It’s also able to offer low running costs and emits next to nothing, but can that help the i8 Roadster top the bill when it comes to performance drop-tops?

The biggest change here is, of course, the lack of a roof. BMW has whipped off the i8’s top and, because of its predominantly carbon-fibre underbody, it hasn’t had to laden the car down with additional strengthening. That means the Roadster’s weight stays down, and as a result it’s just 60kg heavier than its hard-top brother. The roof mechanism itself is clever too, taking just 15 seconds to raise or lower at speeds of up to 31mph. The exterior of the car has also been lightly breathed upon to freshen its looks.

The i8 Roadster makes use of the same powertrain as the regular i8, so you’ll find a 1.5-litre three-cylinder turbocharged petrol engine

linked to an electric motor. The combustion engine powers the rear wheels via a six-speed automatic transmission, while the electric motor powers the front wheels through a two-speed automatic ‘box. BMW has also increased the car’s battery cell capacity, so while you still get 369bhp and 570Nm of torque, the Roadster can still travel up to 33 miles on electric power alone. Both units combine to offer good levels of performance, with the electric motor filling in the gaps of the petrol’s power delivery. Thanks to this, 0-60mph takes 4.4 seconds and its top speed is 155mph.

Usually when converting a regular hardtop into a convertible, you’d expect a significant penalty to the way the car drives. Lopping the roof off usually requires additional bracing to stop the car from flexing too much, and this adds weight, blunting the vehicle’s performance. However, as we mentioned, the i8 Roadster hasn’t suffered too much with the conversion.

This means that it steers just as keenly as the Coupe, and manages the weight it does have well through the corners. Push the i8 Roadster a little harder and it does fall into understeer, the front tyres scrubbing wide with little effort. We’d also like the brakes to be sharper.

The regular i8 still looks like nothing else on the road, despite having been around for some time now. The Roadster, in our eyes at least, looks even better – particularly in the ‘E-Copper’ colour our test car was finished in. The bubbles behind driver and passenger have been accentuated, giving it the look of a 1950s racer, while the two-tone alloy wheels fitted to our test car stood out too. The front of the car has benefited from some additional design touches. There are revised air ducts finished in gloss black, while the headlights’ look has been updated as well.

The i8 Roadster’s interior remains largely unchanged over the Coupe’s, though it does benefit from the addition of a few new colour and material combinations. It’s still a well-made place to be, albeit one that is starting to feel its age a touch now; the screen, though clear, isn’t quite as pin-sharp as rival systems while the multifunction steering wheel hasn’t got the features you’ll find on other current BMWs.

The Roadster, does however, have practicality on its side. Though soft-tops are usually the less spacious option, this i8 packs more luggage space than its hard-top stablemate. In fact, you’ll find 188 litres of storage space in the Roadster – close to 35 litres more than the Coupe.

Prices for the i8 Roadster start at £124,735, there’s plenty of equipment included as part of that base price. You get 20-inch alloy wheels, for instance, and full leather upholstery too, while a suite of safety assistance systems such as forward collision warning, city collision mitigation and high beam assistant all help to keep the Roadster as safe as possible.

It can be easy to ramp up the car’s price however. Apple CarPlay, for instance, is a £235 optional extra – which seems a little mean given it is standard on the majority of hatchbacks currently on sale today. Our test car weighed in at a hefty £135,810, with options such as LaserLight headlights (£5,100) contributing to its rather chunky price tag.

Car said the i8 Roadster is a ‘tighter, more intuitive and more rewarding car to push than its predecessor’. Autocar said: ‘It may have been a long wait, but the i8 Roadster does not disappoint.’

BMW already claims that the Roadster will outsell the Coupe three to one. There’s little reason why you wouldn’t go for the soft top; it’s quick, great to look at and its roof mechanism is simple and easy to use. The hybrid powertrain keeps running costs to a minimum, yet despite that, there’s a whole lot of performance drivers can enjoy.