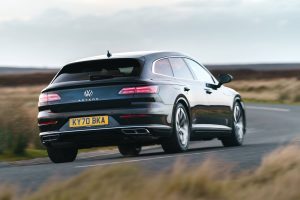 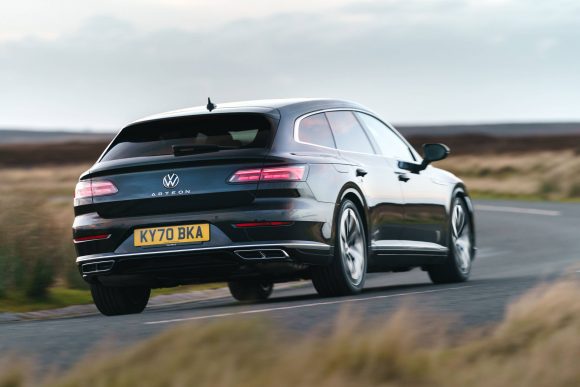 First Drive: Is the Volkswagen Arteon Shooting Brake a one-trick-pony?

There’s no denying the Arteon Shooting Brake has bags of style, but can it also deliver a good driving experience? Jack Evans finds out

When we saw the first sketches of the Arteon Shooting Brake in June 2020, we, like most others, thought ‘that’ll never enter production’. Luckily, those sketches of a concept car have transformed into a fully-fledged production car, but are these looks backed with real-world capability?

It shares much with the Arteon hatchback, but here there’s a greater focus on practicality thanks to that elongated rear-end. As well as the petrol version we’re testing here, the Arteon’s range of powertrains includes diesel and a recently-announced plug-in hybrid. A range-topping, performance-focused ‘R’ variant is due to take its place at the top of the range shortly too.

There’s also an update in on-board technology compared to the previous-generation, hatchback-only Arteon.

Our test car was driven by a 2.0-litre turbocharged petrol engine, sending 187bhp and 320Nm of torque to the front wheels via a seven-speed automatic gearbox. Volkswagen says 35.6mpg on the combined cycle is possible while emitting 179g/km CO2.

If customers are after better efficiency, then the PHEV could be the way to go as it emits just 26g/km CO2, yet matches this petrol’s acceleration figures. Plus, there’s the potential to travel up to 39 miles on electric power alone and, at £40,705, it’s only £4,000 more expensive than this model; a figure which will no doubt be evened out by the fuel savings brought by the hybrid.

When it comes to performance, the Shooting Brake stands firmly in the middle of things. Going from 0-60mph takes 7.5 seconds while flat-out it’ll hit 145mph. They’re figures which are decidedly par for the course. 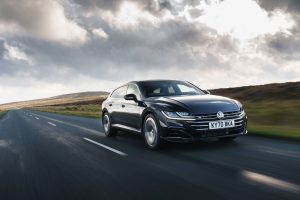 Take one look at the Shooting Brake’s long, sleek lines and you already expect it to provide a refined and easy-going driving experience. For the most part, this is the case – particularly on motorways – where the car’s cocoon-like interior remains quiet.

However, at lower speeds, the car’s firm suspension setup and 19-inch alloy wheels combine to create a genuinely brittle ride. It thuds and crashes through potholes and over speed bumps, diminishing the car’s limousine-like experience.

The steering is nervously light, too, and has a tendency to give the car a dart-ish feeling. And despite that firm ride, the Arteon’s body control isn’t kept in check – particularly through quicker corners – where it feels a touch wobbly and out of sorts. We could let that go if the car was softly sprung from the outset, but given how firm this Arteon is, it’s hard to look past. This issue could be alleviated by opting for an Elegance-spec car – as opposed to an R-Line – which brings smaller wheels.

You can’t fault how the Arteon Shooting Brake looks. Compared with other estate cars on sale today it stands head and shoulders above them in terms of sheer head-turning good looks – in our opinion, of course.

Though ‘our’ car came in a flat silver shade and still looked excellent, we’d argue that a darker colour could be even more flattering to the Shooting Brake’s long, sweeping lines, where the chrome accents on the front grille and along the side would stand out even further. 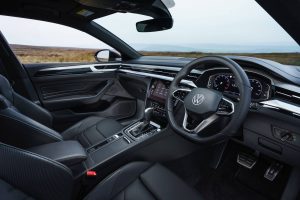 As Volkswagen’s range-topping saloon and estate, the Arteon has been brimmed with high-quality materials and, because of this, it’s got a significantly high-end feel about it when you step inside. The forward view is good and relatively uninterrupted by the pillars – which aren’t too thick – though that long roofline does mean that rearward visibility is a touch tight.

There’s space, too, with plenty of legroom available for those in the back. When it comes to boot space, the Shooting Brake brings 590 litres of load area, rising to 1,632 litres when you fold down the rear seats. The former represents a marginal increase over the hatchback Arteon’s 563-litre boot, though the latter is a large bump on the regular car’s 1,557-litre seats-down load area.

Again, sitting at the top of the range means that Volkswagen has graced the Arteon with plenty of standard equipment. Key features on this R-Line car include adaptive cruise control, three-zone climate control and a panoramic sunroof with integrated roller blind.

The infotainment offering comprises of an eight-inch touchscreen which houses media and satellite navigation functions as well as Apple CarPlay and Android Auto. It’s clear and simple to use, while the smartphone integration systems work really well on the screen as a whole.

Many of the Arteon’s cabin controls use haptic-style buttons which do feel quite odd in operation. It’s a little bit like having pins and needles; you’re aware that you’re pressing a button, but there’s no real response to your request. The ones in the main dashboard area are easy to get used to, but the ones on the multifunction steering wheel really aren’t that intuitive, unfortunately. 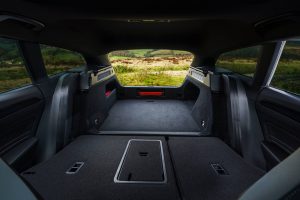 Autocar said: ‘Striking as the Shooting Brake is, it’s difficult to make any convincing case for this 2.0 TSI version when the BMW 320i Sport exists. Or, even better, the 320d M Sport.

‘For space and rarity, the Volkswagen wins, but in every other parameter, it comes off worse. And when you consider the almost equally striking Peugeot 508 and the fine-handling Mazda 6 Tourer, the Volkswagen also seems distinctly expensive.’

The Arteon Shooting Brake’s looks are easily the main attraction to this ultra-sleek estate car. Many people will naturally gravitate towards it because of its eye-catching design. But though its looks will leave a lasting impression, the same can’t be said for the way it drives. It gets the core areas of driving done, but doesn’t go above and beyond to impress or delight as the exterior does.

Rivals to the Shooting Brake certainly drive in a more exciting and involving manner and we’d probably steer clear of this R-Design trim if you’re after a comfortable ride. However, if you’re wanting a regular car that’ll inject some interest into every day with its design, then the Arteon Shooting Brake could be the car for you.

Company car drivers after something that stands out, family buyers after some style compared to an equivalent SUV

Its sheer good looks really make it stand out