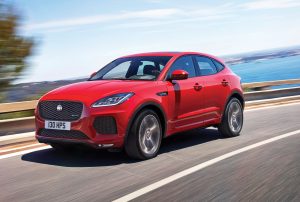 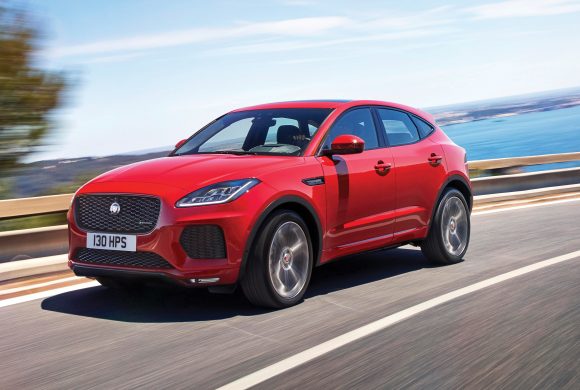 If you want to make money in the automotive industry these days, you need SUVs. Large ones, small ones and mid-sized ones – the latter being where the new Jaguar E-Pace comes in. The E-Pace expands Jaguar’s SUV line-up to two – the larger, award-winning F-Pace was introduced last year.

This is a completely new model for Jaguar, but aside from the bodywork, most of its construction uses existing JLR bits. However, the sum of all these parts is something the British brand has never offered before – design boss Ian Callum explained that the company targeted SUV practicality with the driveability and youth appeal of a hot hatch.

It’s also the first Jaguar to exclusively use the brand’s range of Ingenium engines, which are economical and inexpensive to run, if a little noisy.

There’s a 2.0-litre diesel and petrol available in various states of tune. First we tested the 178bhp diesel engine with all-wheel drive, which proved perfectly up to the task of lugging the E-Pace around town and cruising at motorway speeds.

We also got behind the wheel of the 296bhp petrol, which proved a surprisingly good steer.

The overall drive lacked polish, we felt. The nine-speed automatic gearbox is the clear weak link, while the ride is also a bit too firm (switching to comfort mode doesn’t seem to remedy this). It did excel in one department, though – handling.

To burnish the E-Pace’s sporting credentials, Jaguar took styling cues from its F-Type sports car, with the most obvious being the headlights. It’s far from a baby F-Pace, though – something Jaguar was keen to achieve – and has a far more ‘cutesy’ appearance than its bigger brother.

The first thing you notice when you climb inside the E-Pace is how roomy it is. The styling does a great job of hiding the vehicle’s proportions and it feels like a much larger SUV.

The standard specification is impressive, and makes the £28,500 starting price feel pretty well justified. All E-Pace models get the updated TouchPro infotainment system (which is light years ahead of the old set-up), LED headlights and a rear-view camera. Driver assistance systems include driver condition monitoring and emergency braking. The high-spec First Edition E-Pace, which is available to early buyers, has soft leather upholstery, a suede cloth roof lining and 20-inch alloys.

What did we think?

We had high hopes for the E-Pace, and while it’s a great drive on a B-road it’s let down by the harsh ride and sluggish automatic gearbox.