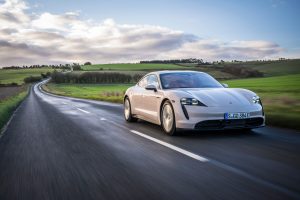 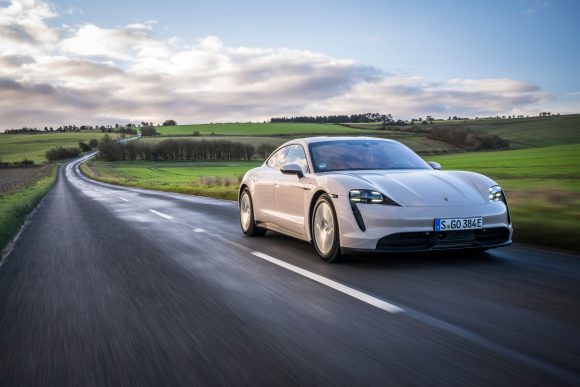 It’s a terrible cliche to compare every electric vehicle to a Tesla but in this case it actually fits, because the Tesla Model S has a worthy competitor in the form of the Porsche Taycan.

Yes, Tesla got ahead of the EV game, but more-established manufacturers are now taking the fight to the Americans.

The Taycan is an electric, four-door, four-seat, coupe-like saloon, and has been winning many plaudits for bringing the typical Porsche quality and attention to detail to the premium EV market.

This year sees the range expanded to include a new, less-expensive version, saving more than £13k on the next model up – an enticing prospect.

The most obvious update is the fact that this is the first Taycan to offer rear-wheel drive where the rest of the range uses all-wheel drive.

This comes from Porsche fitting a single electric motor to the rear axle rather than both axles.

Despite being the entry-level model, though, that’s pretty much the only major change from the rest of the range.

As such, the RWD version gets the same 2021 model year updates as more expensive Taycans, such as the new quick-pay system for charging, a 22kW on-board charger and a colour head-up display. 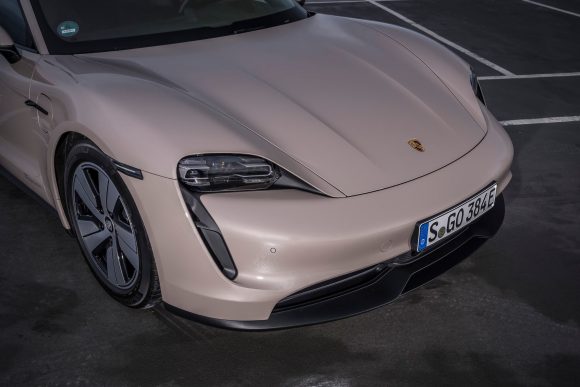 There’s a choice of two batteries that not only dictate how much range you get, but also the power output.

Opting for the basic model gives you 317bhp and 345Nm of torque with a 268-mile range, but upgrading to the Performance Battery Plus provides 370bhp and 357Nm with a 301-mile range.

Despite these figures, the 0-60mph sprint is 5.2 seconds and the top speed is 143mph for both.

If you’ve never driven one of the top-spec Taycans, you won’t be disappointed by the performance on offer.

From a standstill, this RWD Taycan still feels rapid, helped by the fact Porsche unlocks a bit more power when using launch control, but even while on the move the motor is incredibly responsive if not whipcrack-fast.

Perhaps the biggest compliment you can hand the Taycan is that it feels delightfully analogue behind the wheel.

Some electric cars can be quite devoid of feel, but the Taycan has beautifully judged weight to the steering plus levels of comfort and refinement of which its rivals could only dream.

Motorway miles breeze by, with minimal road noise making its way into the cabin, and the ride quality is superb.

However, it can flip from quiet and comfortable to agile sports car at the drop of a hat, so although it doesn’t have the gut-punching acceleration of other Taycan models, its ability to bring a smile to your face on a winding road cannot be understated. 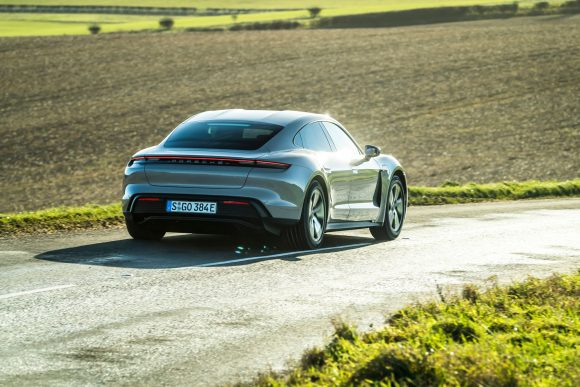 There’s no denying the Taycan has some quirky looks up front that won’t suit everyone’s tastes, but there’s something unmistakably Porsche about the Taycan’s appearance.

The buggy headlights aside, there’s an elegance to the coupe-like lines and the way the rear doors fit into this sloping roofline without fuss.

The rear is easily its best angle, though, with the futuristic full-width tail-light offering a fantastic light signature.

It also sits on the road with real presence, thanks to its low ride height and large alloy wheels that fit snugly within the subtly flared arches.

Despite a few ‘controversial’ details, there’s no denying the Taycan is a fantastic-looking thing.

The driving position is decidedly sports car, as you slot down into the cabin with the dashboard wrapped around you and your legs outstretched.

There’s plenty of adjustability to get comfortable, but with a low windowline and dashboard, some drivers might feel like they can’t get low enough in the seat.

The design is a little uninspiring but the materials used are fantastic throughout, being soft to the touch but also feeling as if they’re built to last.

Perhaps the only complaint is that the infotainment graphics feel a bit outdated, the main screen is quite small and it’s not particularly intuitive to use.

Meanwhile, the lower screen is bizarrely underused, with a lot of dead space.

Taller passengers in the rear might also find the back seats a little claustrophobic, as the sloping roofline that looks so good from the outside eats into their headroom. However, those under six foot shouldn’t have too much issue. 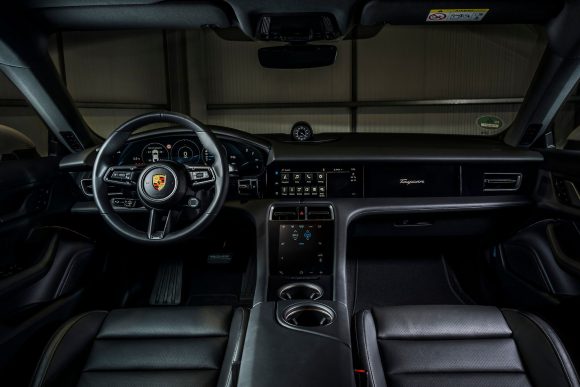 As is normal for Porsche, you can spend thousands on dozens of extras, including more alloy wheel options, exterior styling changes, upgrading the leather upholstery (the top-spec ones costing almost £4,500), and sports seats (£1,440).

Although it can be tempting to tick lots of option boxes, the entry-level model’s best selling point is that despite costing £70k it actually feels like good value for money against the rest of the range.

If you’re spending thousands upgrading the cabin, sound system and getting new alloys, you’ll quickly reach the point where you should consider more powerful models with more range.

Often when an entry-level version of a car is released, we end up discussing whether what’s been removed is worth the savings, but that’s not the case with the Taycan.

Its best trick is not feeling like an entry-level model at all, so if you don’t need the extra power, all-wheel drive and longer range, it’s the sensible option.

It does the relaxing premium saloon thing well and can bring a smile to your face when the roads get fun.

Resist the urge to tick too many option boxes and you’ve got yourself a fantastic deal.