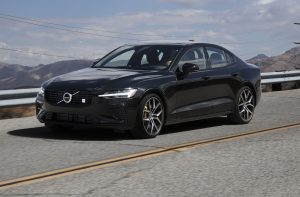 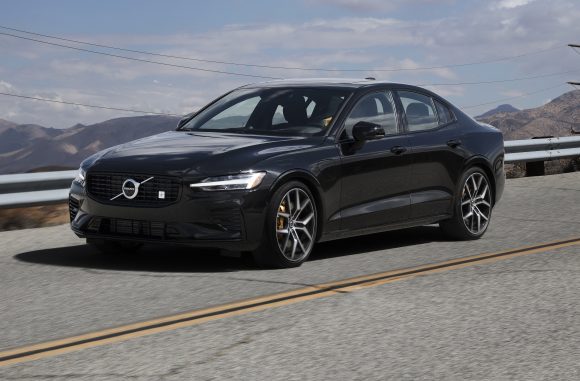 This compact four-door is designed to take on the likes of the Mercedes C-Class and upcoming and all-new BMW 3 Series. It’s based on Volvo’s Scalable Platform, and therefore shares its underpinnings with the XC90 and V90, to name just two.

The standout feature of this latest Volvo is the lack of any diesel option, leaving just petrol and plug-in hybrid offerings. It reflects Volvo’s push towards electrification – but to clarify, that doesn’t means petrol and hybrid powertrains are about to be discontinued. The interior has been treated to plenty of plush materials typical of Volvo.

Together, this is linked to a rear electric motor that drives – unsurprisingly – the rear wheels. This Polestar Engineered T8 benefits from a series of high-performance parts, too.

Look closely and you’ll see six-piston Brembo brakes peering out from behind 20-inch forged wheels, while Ohlins adjustable dampers have been fitted too. There’s also a bump in power over the regular T8 – around 15bhp more, in fact.

The T8’s engine response is linear and predictable, with the combination of combustion and electric unit blending seamlessly to provide effortless forward progress. It’s punchy, too, particularly from a dead start where the electric motor and its instantaneous torque makes itself known.

The ride is a little firm, in all honesty. We’d argue towards a smaller wheel size than the 20-inchers to help remedy this.

The looks aren’t groundbreaking but that’s simply because they play so close to the other cars in the range. It is, again, a minimalistic and thoroughly Scandinavian design and looks particularly good in the flesh.

It’s an agile, taut look – and alludes to a far sportier ethos than that of Volvos of old. Would we like it to be a little more exciting? Perhaps. But in this segment, playing it safe isn’t a bad thing, especially when you consider the understated designs that have been coming from German rivals.

It’s business as usual in the cabin of the S60, but this is something we’re quite happy about.

It’s a beautiful blend of high-quality materials and well-executed tech, and everything feels built to last. The large central touchscreen dominates the interior, and this is complemented by the central screen between the dials in front of the driver. There’s plenty of headspace for those sat up front, while those in the back do equally well. The boot is decent too, offering 442 litres of space with the rear seats in place.

Full specifications have yet to be confirmed but ours came with a host of equipment, including a full sat nav system, Bowers and Wilkins stereo and nappa leather upholstery.

The S60, even in standard form, is an excellent alternative to current and forthcoming German rivals. It’s well built, beautifully finished and looks good out on the road – even if its design plays things rather safe.

This T8 Polestar Engineered model makes a particularly strong case for itself, thanks to its combination of robust performance and good economy figures.

We’ll have to wait and see what Volvo expects customers to pay for this model – although we’d hazard a guess at the £55,000 mark – to see if it’s value for money. However, off-the-bat impressions are good – and rivals best be worried.