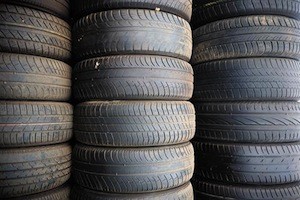 STAFF at Duxford Motor Group returned to work after their Christmas and new year break to find a huge tyre-sized dent in the outer wall of their garage.

The tyres left a severe and expensive dent in the dealership wall, in Newmarket Road, Duxford, Cambridge, while the impact caused a 2,000-litre oil tank to move by six inches.

Employees at the family-owned Citroen and Mitsubishi dealership called the police to inform them of the incident.

Allanson told the Cambridge News: ‘Anyone nearby must have heard quite a loud bang. We are hoping someone who heard something will get in touch.

‘There is a huge dent in the brick work and cracks on the outer wall of the building, the damage is quite extensive.

‘There is a lorry going round somewhere without two wheels. The flying tyres could have seriously injured someone, it could have been critical. They are certainly not light so if they hit someone they could have killed them.’

He added: ‘It will certainly cost some money to repair but we don’t know how much yet, we will need to complete an insurance claim.

‘We have told police and been given an incident number. It is clear the tyres came from the road, which is about 20ft away from the building and they are covered in brick so it can be the only explanation.

‘It was the last thing we expected to find on our return to work.’